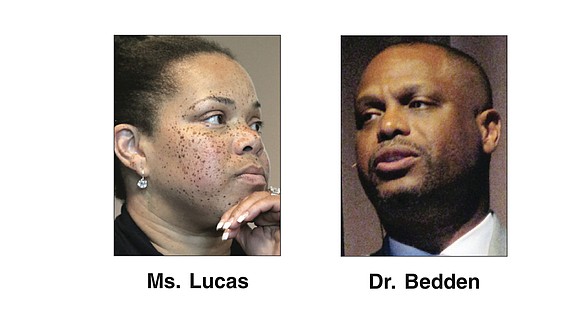 Already under a federal investigation for allegedly engaging in heavy-handed and disparate student discipline, Richmond Public Schools is facing new allegations of ignoring bullying of students with physical and mental disabilities.

Kandise Lucas, an advocate for students with special needs, alleges that Richmond Schools Superintendent Dana T. Bedden and other officials have failed to act on reports about such bullying, most notably at George Wythe High School.

Ms. Bowers told the Free Press that RPS “takes all allegations of bullying seriously. Our violence prevention specialists are conducting an investigation and will follow up with inclusive recommendations for all students.”

The issue went public last week when Alicia Jeter-Toler pleaded at the Richmond School Board meeting May 15 for the emergency transfer of her legally blind daughter from George Wythe. She said her daughter was surrounded on May 12 at school by a group of girls who planned on beating her up as part of a bullying game.

The terrified student was not harmed because another student defended her until security arrived, Ms. Jeter-Toler said.

“I was called to the school to come get my daughter for her safety,” she tearfully told board members. “My daughter has never been in trouble.”

Ms. Jeter-Toler also said Dr. Bedden had indicated there would be an investigation, but had not responded further to her request to transfer her daughter from the South Side school.

Ms. Jeter-Toler told the board that her daughter became a target for girls in a competition to beat up handicapped students in regular classes. She said the girls earn popularity points for “banking” or surrounding and beating up such students and posting the beating on Facebook or other social media.

Ms. Jeter-Toler did not respond to repeated interview requests from the Free Press. School officials and other could not confirm her report about a bullying game taking place at the school.

Two George Wythe teachers who are popular with students told the Free Press that they knew nothing about such a game, either from students or from staff meetings. Both spoke on condition of anonymity because they are barred from speaking to reporters without official RPS permission.

However, in the wake of Ms. Jeter-Toler’s testimony, the student has been transferred to Huguenot High School, Ms. Lucas reported.

According to Ms. Lucas, reports about the game have come from four families whose students have been “mercilessly bullied” with little response from the school.

Ms. Lucas said RPS officials moved too slowly to respond to the concerns from Ms. Jeter-Toler about the safety risk, forcing her to go public. And despite the anti-bullying policy, Ms. Lucas said, officials aren’t doing enough “to end the bullying or develop plans to address disability harassment.”

She also alleges the district has not filed required reports documenting the bullying and, in some cases, failed to notify a parent.

Ms. Lucas said such actions do not comply with policy recommendations from the state Department of Education to deal with bullying.

RPS is facing a probe from the U.S. Department of Education’s Office for Civil Rights whether it deals more harshly with African-American students than it does with white students who violate the Student Code of Conduct.

The probe is based on a complaint filed last August by the Richmond Branch NAACP and the American Civil Liberties Union of Virginia alleging that African-American students and students with disabilities are 12 times more likely to be suspended than white students.