Jason Kamras from D.C. to become next Richmond superintendent 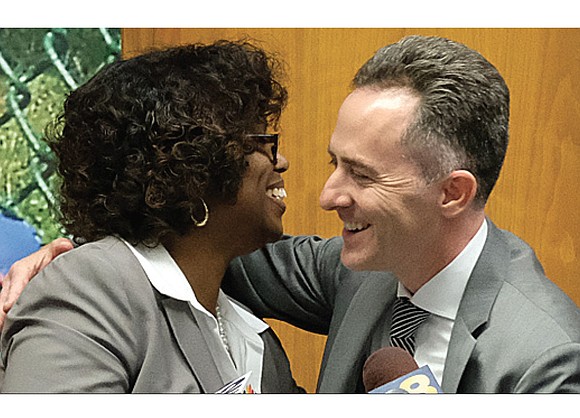 They campaigned on a platform of change for a school system that continues to rank high in dropouts and suspensions and low in student academic achievement.

Now the largely novice Richmond School Board hopes it has begun to deliver with its choice of a novice superintendent to lead Richmond Public Schools.

With a 9-0 vote Monday, the board selected 43-year-old Jason Kamras, a key player in Washington, D.C.’s efforts to deal with similar school issues, as Richmond’s next schools superintendent.

The board hopes that Mr. Kamras’ experience as a celebrated teacher and administrator — he was the 2005 National Teacher of the Year — will pay dividends for Richmond students in his first foray as a superintendent.

He assumes his duties on Feb. 1.

In contrast to four years ago when his predecessor, Dr. Dana T. Bedden, was chosen, the current School Board declined to hold a public meeting to showcase the three finalists and receive public input on the choices before the final vote.

School Board Chairwoman Dawn Page is enthusiastic about Mr. Kamras leading the city’s public school system of 24,000 students, the majority of whom are African-American.

In her introduction after the vote, she called Mr. Kamras the ideal candidate based on his “nationally acclaimed work to attract, retain and develop outstanding teachers and principals, his innovative efforts to improve instruction for all students in D.C. and his laser-like focus on equity.”

In his first remarks to a crowd of well-wishers, Mr. Kamras, who earned his undergraduate degree at Princeton and master’s at Harvard, vowed to make “excellence” the hallmark of his administration.

He wants to mold RPS into a school system everyone would admire, a place where all of the children are “ loved and nurtured, have their unique identities affirmed and celebrated, are engaged in rich and rigorous learning every single day and secure the academic, emotional and social skills they will need to achieve their greatest aspirations.”

Mr. Kamras said he would strive to achieve that kind of school system in Richmond to ensure students “have the skill, passion and self-confidence to pursue their dreams.”

He said he also believes that public education has to be more than “good instruction.” It also must be about “creating a more equitable society,” he said, that removes the biases and barriers that block the achievement of students of color, children with special needs and those for whom English is not a native language.

He did not mention Richmond’s rundown facilities. He comes from the Washington system that has invested $4 billion to upgrade public schools since 2007 and plans to invest another $1.2 billion by 2022.

Mr. Kamras has spent his entire 21-year career with the D.C. Public Schools, including nearly 11 years as a teacher at a struggling middle school where his innovative method of merging photography and art with math instruction earned him top national recognition in 2005.

Two years later, he was plucked from the teaching ranks by now former D.C. School Chancellor Michelle Rhee to lead her efforts to upgrade instruction.

He also served as chief of instructional practice and chief of human capital before taking his current job as transitional chief of the Office of Equity in recent months.

He is expected to bring some or all of the D.C. playbook to push reform and boost student success in Richmond, a process that has won national recognition, but done little to close the huge achievement gap between white and African-American students — a gap the Washington Post reported is the largest among major school districts in the nation.

He led the effort to create a data-driven evaluation system of instructional staff that enabled Dr. Rhee to replace hundreds of teachers and principals with people rated as higher performing.

After Dr. Rhee left in 2010, he went on to lead the 48,000-student system’s instructional program and then was put in charge of opening an equity office to better serve African-American and disabled students.

His pay of $250,000 a year would be his base salary, but he could earn up to $25,000 more if Richmond schools meet certain performance benchmarks.

Mayor Levar M. Stoney is among those praising his selection. The mayor called him a “reform-minded, creative and innovative educator with a demonstrated commitment to public schools who is not afraid to roll up his sleeves and take on big challenges.

“I congratulate the board on its choice, welcome Jason to our city and look forward to working with him to make things happen for our kids,” Mayor Stoney said in a statement.

The chairman of the Richmond Branch NAACP, which has filed a federal civil rights complaint against RPS for high suspension rates of African-American and disabled students, also supports the choice.

James E. “J.J.” Minor III, who served on the selection committee, said that Mr. Kamras “is someone who will move Richmond forward and help our schools achieve accreditation.”

Bernice Travers, president of the Richmond Crusade for Voters, who also served on the committee, also is positive, but skeptical.

She said she is impressed by Mr. Kamras’ words, but has heard similar promises from the parade of Richmond superintendents who have come and gone in recent years “without having produced any change in the quality of the system.”

Ms. Travers also is concerned that the School Board did not allow the three finalists to meet with the community ahead of the vote.

That’s also a problem for Paul Goldman, chair of the Put Schools First Coalition that has led the effort for school modernization.

He said the failure to hold a community meeting to meet the finalists means the public “was cut out.”

The School Board and the selection committee held several meetings to get community input on what kind of superintendent people wanted, but there were no public sessions to get comments once candidates began submitting résumés. Sixty-five people competed for the job, School Board members said.

Ms. Page brushed off the criticism. She said the secrecy allowed Richmond to “expand its candidate pool” and ensured applications from current superintendents and others who did not want their employers to know they were applying.

Mr. Kamras promised to undertake a listening tour as he prepares to take over from interim Superintendent Thomas E. “Tommy” Kranz, the RPS chief operating officer who has run the system since Dr. Bedden left in June.

He said his views are shaped by his role as a school leader and a parent. He and his wife, Miwa, would be enrolling their sons, ages 6 and 8, in city schools.

Mr. Kamras said along with RPS families, he also wants to hear from and partner with Richmond’s faith, nonprofit and business communities.

“I believe the work of public education must be done with families and the community,” he said. “It really does take a village. I really want schools to be welcoming.”