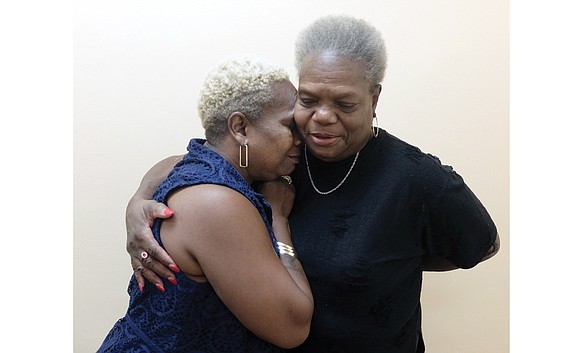 Bonnie L. Davis shares a hug with her biological mother, Sheila Dean Richardson, during an interview last week at the Free Press. They reconnected five decades after Ms. Davis was adopted shortly after her birth in Kentucky. April Coleman/Richmond Free Press

Bonnie L. Davis grew up in an adoptive family, but always longed to find her biological mother.

But the Richmond middle school English teacher, church musician and creative writer, found it nearly impossible, despite spending years seeking records in Louisville, Ky., where she was born.

All she could find out was that her mother Sheila Dean, was 15 when she put her new daughter up for adoption.

She also found out that her name at birth was LaTonya Tandelet Dean. It was changed by her new parents in Kentucky who adopted her shortly after her birth.

“It seemed impossible to find my mother,” said Ms. Davis, whose longing to meet her biological mother intensified following the death of her adoptive parents in recent years.

“I could not find anyone who knew my mother in that area. You know, women change their names when they marry, and people move. So I had sort of given up.”

Thanks to the miracle of DNA science, the two women have found each other after 50 years.

They had an emotional and joyous reunion two weeks ago. And Ms. Davis, who is going through the court process to officially change her name to LaTonya Dean, accompanied her mother to a family reunion last Saturday in Maryland, where she met much of her extended family.

“It was glorious,” said Ms. Davis, bubbling with happiness.

“I know other people are searching for their families, and I want to tell them, ‘Never give up,’” she said.

Ms. Davis took advantage of an offer from a company that offers DNA testing at a low cost. Most people do it to find out about their ancestry.

“I saw an ad on TV, and thought maybe, just maybe, there could be a chance. So I ordered the kit, put in my saliva when it came and sent it back.”

A month later, she got an email from the company, which told her about her heritage, confirmed her birth name and provided her a list of people to whom she might be related.

One of those people, Andre Dean, monitors emails from the testing company. He responded to a notice of Ms. Davis’ search and sent an email that was included in the company’s report to Ms. Davis asking if she might be a long-lost cousin.

It turns out Ms. Davis’ birth family had been searching for her, too.

Within days, she was in contact with another relative, Michael Wade, who gave her contact information for her mother in Columbia, S.C.

“I didn’t know if she wanted to see me,” Ms. Davis said. “I called and left a message to let her know who I was and that it was alright if she didn’t call back.”

Ms. Davis said she had just finished playing the keyboard at the Sept. 24 service at Thirty-first Street Baptist Church in Richmond and noticed she had gotten a call.

When she dialed, a woman answered, and Ms. Davis heard her mother’s voice for the first time.

“My knees got so weak I couldn’t stand up,” she said. “My mind was in a whirl. I could barely speak.” But she collected herself enough to tell her mother that she was on the way.

Within two hours, Ms. Davis and her fiancé were on the road to South Carolina, and six hours later, she had a teary, emotional hug with her mother and met her brother, Courtney.

“I had never stopped thinking about her. I always wanted to find her,” her mother, Sheila Dean Richardson said last week after traveling to Richmond to spend time with her daughter before the reunion.

Now 66 and retired from a career working with juvenile delinquents, Ms. Richardson said she was a young teen living with her grandmother in a small town near Louisville when she got pregnant.

At the time, she said she was considered a disgrace for having a baby out of wedlock. Her grandmother sent to her to Louisville to live in a home for unwed mothers until she gave birth, along with firm instructions to put her baby up for adoption.

“I did,” Ms. Richardson said, adding that she got pregnant again deliberately a year later so that she could get away from her grandmother. She ended up marrying the father, whom she later divorced as part of her own journey.

Ms. Richardson said she never forgot her first child, but she said she, too, found the official secrecy surrounding the adoption too difficult to overcome.

Both women are grateful that their recent health issues didn’t prevent their reunion. Ms. Richardson has overcome cancer, while Ms. Davis has rebounded from a stroke.

“God is good,” said Ms. Davis. “It took divine intervention for all this to come together.”