Chadwick Boseman in ‘Marshall’ is bulletproof 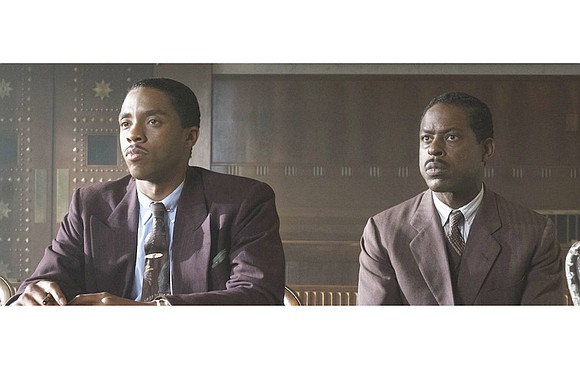 Thurgood Marshall, a titan of 20th century law and a civil rights pioneer, has until now largely eluded Hollywood’s notice. Despite its title, “Marshall,’’ too, is wary of taking on the Supreme Court justice in full, sticking to a minor case from Mr. Marshall’s early career as counsel for the NAACP. That makes, for better and worse, a sometimes slight, sometimes serious courtroom drama, shot through with bright certainty in the coming triumphs for Mr. Marshall and the civil rights movement. It’s a superhero-style origin story: Thurgood, pre- “Brown v. Board of Education,’’ pre-black robe.

And there’s something bulletproof about Mr. Marshall, as played by Chadwick Boseman, in Reginald Hudlin’s film. Mr. Boseman has launched himself as a leading man with an ambitious trio of historical African-American figures: Jackie Robinson, James Brown and now Marshall. His gift isn’t in connecting deeply to these characters, but in capturing an innate and unstoppable swagger. His icons are forward-moving forces of talent and charisma that no bigotry could hope to contain. 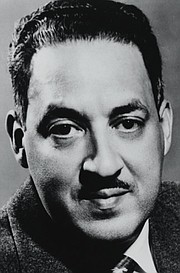 In “Marshall,’’ the attorney is sent to Bridgeport, Conn. to represent a black chauffer, Joseph Spell (Sterling K. Brown), who has been accused by his wealthy, white Greenwich socialite employer (Kate Hudson) of rape and attempted murder. Mr. Marshall, then 33, is an out-of-state attorney who needs a local lawyer to help try the case, turning to the reluctant insurance lawyer Sam Friedman (Josh Gad).

The suburban New England setting differs greatly from the Southern terrain where most civil-rights battles were fought, and where Marshall tried many of his early landmark cases. But it roils with much of the same racism. Marshall is barred from speaking in court by a judge (James Cromwell) little impressed by the NAACP’s mandate to ensure black defendants get a fair trial.

But from the moment Mr. Marshall breezes into the New Haven train station and hands his bags to Mr. Friedman to carry, he oozes an untroubled belief in his cause and his tactical prowess at trial. He needs no assistance, and he gives no quarter to prejudice, telling Mr. Friedman to object over every racial bias. Where others stay mum, he proudly declares from the courthouse steps:

“The Constitution was not written for us. We know that. But no matter what it takes, we’re going to make it work for us. From now on, we claim it as our own.’’

He’s an undeniably empowering and inspirational figure, and “Marshall’’ is a smooth and straightforward package. That the stakes for justice are high is never in question, especially once Mr. Spell — and the extreme poise of Mr. Brown — takes the stand. But “Marshall’’ doesn’t go for the kind of gravity echoed, say, in the one-man play “Thurgood,’’ which James Earl Jones performed on the stage and Laurence Fishburne on the screen. There’s a light comic interplay between Mr. Boseman and Mr. Gad. Mr. Marshall sorts the case out without cracking a book or breaking a sweat.

And, well, Connecticut has never exactly had the dramatic pull of other, more explosive states when it comes to civil rights battles or, well, most anything else. Currently in development is a film adaptation of the 2013 Pulitzer Prize winner “Devil in the Grove,’’ which chronicles a 1949 case of Mr. Marshall’s in Groveland, Florida. That, perhaps, will be a richer, more evocative tale.

But not all civil-rights battles need to carry the weight of the world on their shoulders. That will fall to future installments of Mr. Marshall’s exploits and upcoming films for Boseman, who’ll soon star as the Marvel hero in “Black Panther.’’

“Marshall,” an Open Road release, is rated PG-13 by the Motion Picture Association of America for “mature thematic content, sexuality, violence and some strong language.”