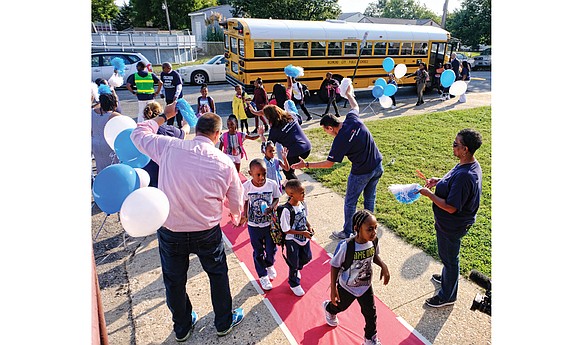 Students are greeted Tuesday at George Mason Elementary School by a cheering squad of volunteers from Capital One. Principal Rose Ferguson and interim Superintendent Thomas E. “Tommy” Kranz are the initial greeters by the school bus door. Photo by Sandra Sellars

Before the first students arrived Tuesday at George Mason Elementary School, Principal Rose Ferguson walked the halls and the playground in Church Hill, and then checked with teachers and support staff to make sure everything was ready.

More than 400 energetic youngsters were expected to bound in for the new 2017-18 school year.

When they arrived by the busloads, the smiling children were surprised. The red carpet, literally, had been rolled out in front of the school, and blue and white balloons swayed in the air. Curbside, they were greeted by Ms. Ferguson, interim Superintendent Thomas E. “Tommy” Kranz, teachers, staff and a plethora of volunteers from Capital One who waved pom poms, cheered and high-fived the youngsters as they walked in.

The song, “Ain’t No Stopping Us Now,” played from a Nissan Sentra parked next to the red carpet.

It was an upbeat way to start a new year at a school that recently grabbed headlines for its bedraggled condition. The change, which included a recent $130,000 deep cleaning, repairs and sprucing up, elevated the spirits of youngsters and their parents on this special day.

“I’m happy about George Mason,” said Brian Ellis, after walking his daughter to her first day in kindergarten. “It’s a really good school. I know my daughter will learn a lot this year.”

Built more than a century ago, George Mason Elementary served as the first school for African-American students in Church Hill. It’s located on North 28th Street in the city’s 7th District.

Teachers and staff members complained to the Richmond School Board as the last school year wound down about horrific conditions at the old building that they said were detrimental to the health, safety and learning environment for students. One teacher wore a surgical mask to class because of foul smells and mold. Teachers also described how they would clean rodent droppings from classroom desks each morning.

They talked about leaks in the bathrooms and problems with the boiler, leaving classrooms with little heat on cold days.

Richmond Public Schools maintenance teams and volunteers spent the summer correcting many of the problems. Bathrooms were cleaned, leaks were fixed and the air quality was tested three times in July and August, Mr. Kranz said.

“We will not put our students, teachers, parents and our staff in harm’s way,” he said.

Volunteers, including local artist Silly, spruced up the interior with a painting of the school’s mascot, a Jaguar, on the landing of a stairwell. They also painted characters on hallway and classroom walls to brighten and make the building more welcoming for youngsters.

“We did things that will extend the life of the building and provide for a good school year,” Mr. Kranz said. “We are making sure all the mechanical systems will be fully operational and address any issues we have. We will be proactive instead of reactive.”

Later in the day, Mr. Kranz received praise from School Board Chairwoman Dawn Page and other board members for the improved conditions at George Mason.

Overall, he said, things went smoothly on the first day of school, although there were a few hiccups. One example: The fan in an air conditioning chiller at Blackwell Elementary School broke. He said the conditions inside the South Side school are being monitored, and that a rush has been put on getting replacement equipment to get the chiller back in operation.

Mr. Kranz said that when it comes to school facilities and their operation, the whole issue comes down to the amount of dollars that City Council provides. He said George Mason should have been receiving an average of $38,000 a year for maintenance, but instead was making do with an average of $12,000 a year.

That’s the reality for all the school buildings, he said. The city, which provides the money, has fallen short of meeting the needs.

He said the school system overall has to make do with $5.5 million a year instead of the $17.3 million that a fully funded maintenance plan would provide.

He urged the School Board to be cautious about making any promises to replace buildings until it completes the comprehensive facilities plan that is due in October to present to the mayor and the council, who then would bear the responsibility for finding the money to implement the plan.

“As a school district, we are going to focus on strengthening and improving our weaknesses,” he said after greeting students and leading reporters on a tour of George Mason. “We have to provide a great education each and every day to all of our students.”