Howard Bison overrun by UR Spiders 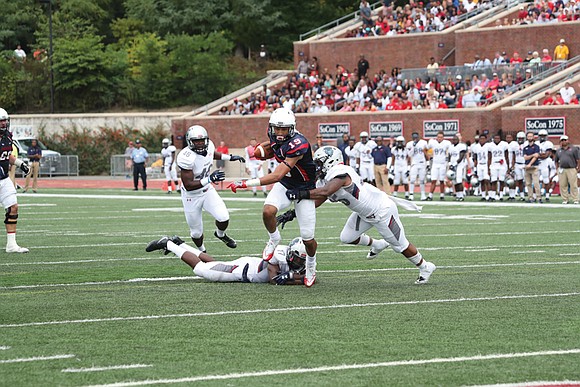 University of Richmond wide receiver Tyler Wilkins carries the ball past the Howard University defense during last Saturday’s blowout at Robins Stadium on the UR campus.

Coach Mike London has found it is far easier coaching football for the University of Richmond than coaching against UR.

The Bison departed without so much as a “what if?”

It was classic mismatch, and worse than expected considering Howard’s headline-grabbing, season-opening upset victory at the University of Nevada-Las Vegas two weeks prior.

UR proved a more dicey venue than Vegas for the visiting team.

The host Spiders led 48-7 at halftime and 61-14 after three periods. UR quarterback Kyle Lauletta threw for a school record six touchdowns before being relieved early in the third period. It could have been much worse.

Coach London, a former UR defensive back, has sparkling memories of Richmond’s as a player and a coach. As UR coach in 2008 and 2009, he posted a 24-5 record that featured the 2008 FCS championship.

Regardless of who is coaching, schools from the historically African-American MEAC conference have fared poorly against programs aligned with the juggernaut Colonial Athletic Association. Since 1998, CAA schools have won the FCS national title six times, including James Madison University, which won last season.

MEAC is also under the FCS umbrella, but has had virtually no success in the postseason tournament.

Coach London shouldn’t take his latest defeat too personally. Last year, UR bombarded another of its ex-coaches, Latrell Scott, 34-0, with Coach Scott returning to the UR campus as the head coach for Norfolk State University.

MEAC and CAA schools rarely met on the gridiron until recently. Often the cause for mingling is mandated by FCS (formerly known as 1-AA) playoffs.

Like most MEAC schools, Howard plays a disproportionate amount of early games on the road, generally for financial guarantees. Now 1-2 — the Bison lost at Kent State University on Sept. 9 — Howard returns home to Washington to face MEAC rival Bethune-Cookman University at 1 p.m. Saturday, Sept. 23. Howard’s remaining scheduled games all will be against MEAC opponents.

The MEAC champion will advance to the 3rd Annual Celebration Bowl on Dec. 6 in Atlanta to face the SWAC champion. Other MEAC schools are eligible for the FCS playoffs.