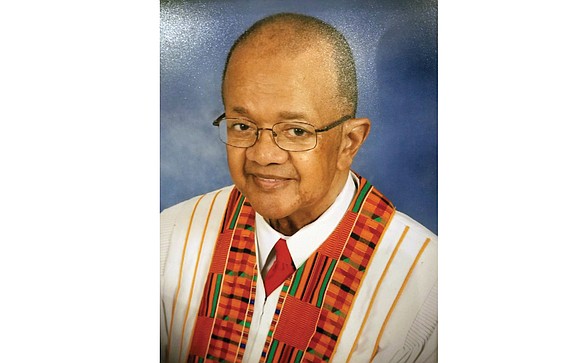 The Rev. Eddie Lee Perry went from the military to the ministry while also playing a key role in recruiting social workers and other staff for the state Department of Social Services.

For 13 years, he served as director of human resources management for the Virginia Department of Social Services.

The retired Army major also served as pastor of St. John Baptist Church in Charles City County for 15 years while holding down his full-time state position.

In each role, he proved to be a “a man of many talents and great dedication to the welfare of others,” according to a resolution the Virginia General Assembly passed in 1999 praising him for his work on behalf of his church, the Richmond area and the state.

Among other things, he brought a professional approach to personnel management at the state agency. He taught the agency to hire people based on their knowledge, skills and ability and insisted that applicants have college degrees instead of simply on-the-job training.

Such an approach is the reason Rev. Perry is being remembered as a compassionate and effective administrator and faith leader following his death Thursday, Sept. 14, at McGuire Veterans Administration Hospital following a long illness.

“He was the most caring, intelligent and knowledgeable person I ever knew,” she said.

Rev. Perry’s life will be celebrated at noon Saturday, Sept. 23, at St. John Baptist Church, 8131 Roxbury Road in Charles City County. The Rev. Ellsworth Tait, the church’s current pastor, is to officiate, and Dr. James Harrison, executive minister of the American Baptist Churches of the South (ABCOTS), is to deliver the eulogy.

Interment will be in the church cemetery.

Born in Cleveland, Rev. Perry spent the first 20 years of his adult life in the Army, serving overseas, including in Vietnam. He also was an ROTC instructor at the University of Dayton.

Mrs. Perry said her husband received a direct commission that moved him from sergeant into the officer ranks. He also earned his bachelor’s degree from Ohio State University while in the service and finished his career as an administrator in the adjutant general corps, serving at Fort Eustis.

After retiring from the Army, he worked with the Newport News Housing Authority before being tapped in 1981 to manage human resources for the state Department of Social Services, a position he held until he retired in 1994.

He later enrolled in Virginia Union University’s Samuel DeWitt Proctor School of Theology, where he earned a degree in divinity. He then set up a satellite program in Charles City for the school, where he served as an instructor and coordinator.

During his tenure at St. John, he built the membership so that the church could hold weekly Sunday services instead of every two weeks. He also is credited with linking the church to ABCOTS, reorganizing and expanding the choirs, leading the church in creating a constitution and bylaws and strengthening the board of deacons. He also led the church in honoring members’ children who made the honor roll in area schools.

He served on the ABCOTS board for eight years and served two years as the group’s minister of mission support after leaving St. John.

Rev. Perry also served as president of the Charles City County Branch NAACP, was a member of the Southern Christian Leadership Conference and the National Action Network.

He was a team leader for Junior Achievement and launched a Girl Scout troop at the church. He also was a member of Kappa Alpha Psi Fraternity and its Richmond alumni chapter.

He also was active in the Baptist Ministers’ Conference of Richmond and Vicinity.

In addition to his wife, survivors include the couple’s four children, Curtis D. Perry, Eddie L. Perry Jr. and Patricia A. Perry, all of Richmond, and Monica Russell of Tampa, Fla.; a brother, Wilson C. Perry of Covington, Ga.; a sister, the Rev. Annie G. Clark of Cleveland; and five grandchildren.