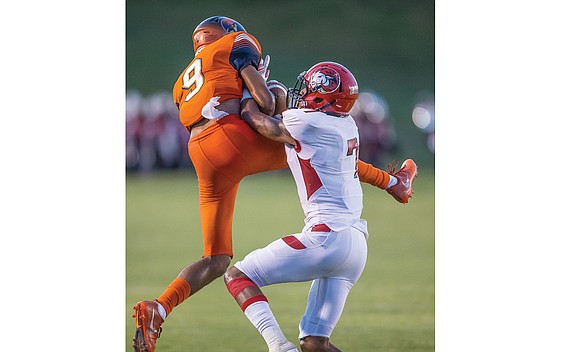 The Trojans improved to 3-0 overall — and 2-0 in the CIAA — following a jittery 33-27 overtime victory last Saturday over visiting Winston-Salem State University, the two-time defending CIAA champion.

Contrasting that, Livingstone College is 0-4 this season and has dropped seven in a row going back a year.

Kickoff is 6 p.m. at Alumni Memorial Stadium in Salisbury, N.C.

The home team hopes for better results than a year ago, when VSU routed the Blue Bears 47-0 at Rogers Stadium in Ettrick.

Overcoming some gaffes by its special teams last Saturday, VSU leaned on its “Kecoughtan connection” and an overwhelming offensive performance to deny Winston-Salem State and avenge a road loss to the Rams last year.

Winston-Salem State is now 2-2 this season.

Trenton Cannon, a VSU senior from Hampton’s Kecoughtan High School, was the usual star — rushing for 144 yards and two touchdowns and snagging passes for 52 more yards.

Not so accustomed to the spotlight is Thomas Koufie, a former teammate of Cannon’s at Kecoughtan High in Hampton. A double transfer from Foothills College in California and University of Louisiana at Monroe, the bullish, 225-pound Koufie rumbled 17 yards for the winning touchdown in overtime, igniting unrestrained celebration on the field and in the bleachers.

Cannon set the Trojans’ single-season record in 2015, then broke his own mark a year ago.

VSU accumulated 587 yards total in offense, compared to 354 yards for Winston-Salem State, with quarterback Cordelral Cook passing for 131 yards and rushing for another 115.

Late in the first half, Cook showcased his speed, bolting for a 76-yard touchdown run, a rare feat for a quarterback.

There was no shortage of late-game heroics or unusual circumstances. The game was delayed at least 15 minutes in the second half because of a power outage in two light towers.

On the brink, the Trojans tied the game at 37 with 40 seconds left on a Cannon 3-yard rush and Cook’s 2-point conversion.

VSU had trouble pulling away in part because of two missed extra points and two missed field goals by Cesar Alfaro. VSU also had a bizarre touchdown on a deflected pass caught by tackle Jamonte Spriggs that was voided by penalty.

As a program, VSU is enjoying a five-year roll.