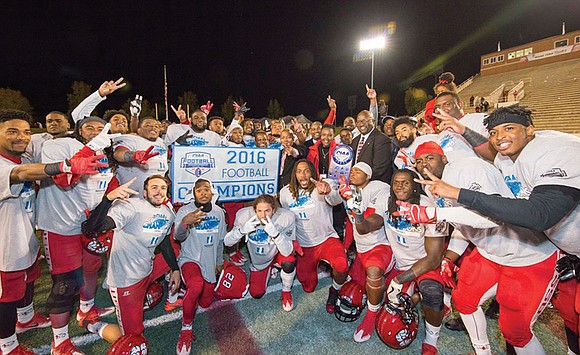 In a late addition to the Trojans’ schedule, VSU traveled 635 miles to defeat Tuskegee University in Alabama 45-35 last Saturday.

Despite falling to 8-2, Tuskegee University advances to the NCAA Division II playoffs and will travel to Newberry College in South Carolina to play on Saturday, Nov. 19.

Despite its strong finish, VSU failed to make the NCAA playoffs. Instead, CIAA champion Winston-Salem State University advances to play this Saturday at Long Island University-Post in New York.

The Trojans’ game at Tuskegee wasn’t arranged until after VSU routed Virginia Union University 49-21 on Nov. 5 in Richmond.

Alabama is familiar turf for Coach Barlow. He is from Montgomery, Ala., 39 miles from Tuskegee, and played and coached at Alabama State University in Montgomery.

“Our guys knew it would be a challenge, but they really wanted the opportunity,” Coach Barlow said of the extended season.

VSU employed its usual recipe for victory, “ground and pound,” plus an added ingredient — kick returns — in dismantling the Golden Tigers.

Trenton Cannon rushed for 99 yards and two touchdowns and Kavon Bellamy added 82 yards on the ground.

Cannon, who is from Hampton, added a 75-yard kickoff return for six points and Marcus VanHook scored another touchdown on a 79-yard punt return.

The versatile Cannon closed his junior season with 21 touchdowns —18 rushing, two receiving and another on a kick runback. His 1,214 yards rushing breaks his own record of 1,128 set a year ago.

VSU was dominant statistically as well.

• The Trojans had 11 interceptions; opponents, 4. 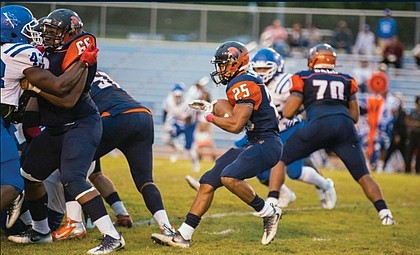 Virginia State University running back Trenton Cannon carries the ball, helping the Trojans to a 45-35 victory over Tuskegee University last Saturday in Alabama.