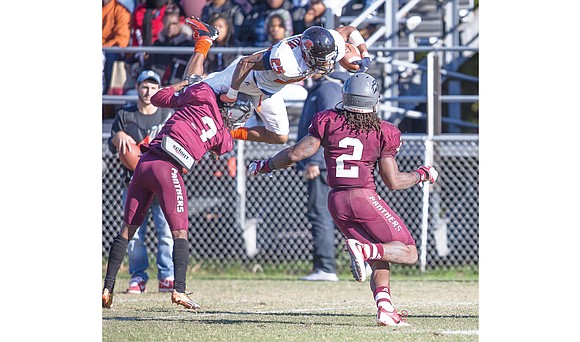 Virginia State University zoomed across the finish line of the 2016 football season as if powered by rocket fuel.

By contrast, Virginia Union University appeared to be running on fumes as it sputtered to the end.

Showing off last Saturday before a Hovey Field crowd of 9,450 fans, the Trojans routed the host Panthers 48-21 in the season finale for both teams.

VUU closes at 5-5 overall and 2-3 in the CIAA Northern Division in Coach Mark James’ third season.

Bowie State is also 4-1 in the division but won the head-to-head tiebreaker over the VSU Trojans.

For the season, VSU was the runaway CIAA leader in rushing with 2,800 yards and 5.8 yards per carry.

Senior quarterback Tarian Ayres passed for 169 yards in his Trojans farewell, with touchdown connections to Trey Reed and Christian Harden.

VSU’s losses were to division champs Bowie State and Winston-Salem State universities. Now the Trojans have all winter to ask “What if?” regarding the Bowie State loss. In that game, the Trojans led by 17 in the second half, only to let it slip away.

Regarding VUU, the Panthers played their best against the best — defeating both Bowie State and Winston-Salem State universities.

Coach James’ squad was in position to win it all — including the NCAA Division II playoff berth — after coming from 21 points down to defeat Bowie State in Week 8.

After that, the Panthers wilted, losing at Elizabeth City State University 24-21, then to VSU with a lackluster effort.

Dowdy threw two touchdown passes to Jusse Yorke and another to Gustavious Dames against the Trojans.

In his lone VUU season after transferring from the University of Central Florida, Stanback had 132 yards against VSU and finished with 1,299 yards and 18 touchdowns.

In his last three games, the 230-pound Stanback racked up 469 ground yards and may hear his name called in the NFL spring draft.

VUU won four straight games at one juncture this season, but the Panthers’ defense went soft toward the end.

The Panthers gave up more than 600 yards in its deflating loss at Chowan University and surrendered 33 first downs and 560 yards against VSU.

On the season, VUU’s robust offense accounted for 3,920 yards but the defense gave back 3,915.

To its credit, VUU faced a difficult schedule, starting with losses to Long Island University-Post and Newberry College, two schools that figure to make the NCAA Division II playoffs.

VSU must hate to see the season end.