Why is it flying? 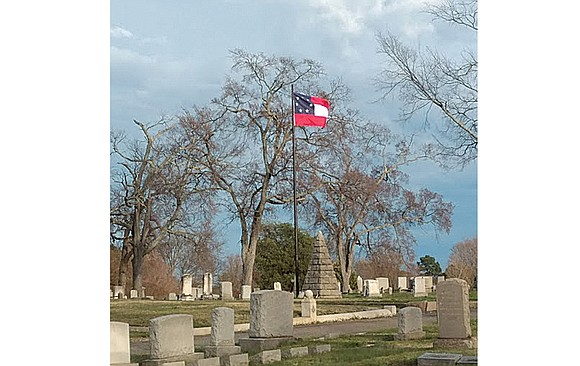 The Confederacy may have been defeated, but the flags of the rebels who fought to separate from the United States to keep black people in bondage still fly in city-owned cemeteries.

The original national flag of the Confederacy, which also was the first battle flag, can be found in Riverview Cemetery in the West End and Maury Cemetery in South Side, both owned and operated by the city.

The flag has a white stripe between two red stripes and a circle of seven white stars on a blue field in the upper left corner.

At both cemeteries, the Confederate banner flies from a tall pole that the United Daughters of the Confederacy set up.

The Richmond-based UDC owns the section of each cemetery where the flags fly, which is why it is allowed, according to Thomas M. Byrnes of the Office of the Press Secretary to the Mayor.

UDC officials did not respond to a Free Press request for information about the flags.

It appears the flags on display have not stirred any protests.

The flag, to which additional stars were added in 1861 as more states left the Union to join the rebellion, continued to represent the Confederacy until at least 1863.

However, a new battle flag, the one with the diagonal cross that has become a symbol of white supremacy, was adopted at the end of 1861.

Confederate flags also fly in the city’s Oakwood Cemetery that contains the graves of 17,000 rebel soldiers. The Sons of Confederate Veterans maintains the 7.5-acre portion of the East End cemetery that contains those graves. The flags that fly include the last national flag of the Confederacy, dubbed the “Blood-Stained Banner” because of its vertical red strip on a white field.

The SCV also places smaller replicas of the best-known Confederate battle flag by each headstone.