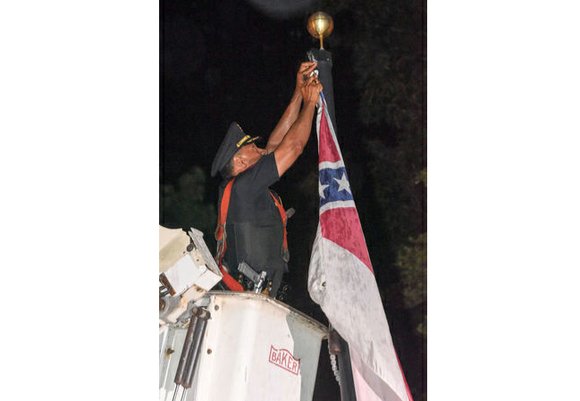 A rebel flag no longer flies from a historic city-owned mansion in this southern Virginia city that briefly served as the third and final capitol of the Confederacy.

The flag was removed from Danville’s Sutherlin Mansion after members of the Danville City Council voted 7-2 on Aug. 6 to limit the flags flown on municipal property to the U.S., Virginia, city and POW/MIA banners.

The mansion houses the Danville Museum of Fine Arts & History.

Council acted after receiving an opinion from Virginia Attorney General Mark Herring that the rebel flag could come down because the granite base of the flagpole recognizes “the historical significance” of the building, not a particular war or specific veterans.

It’s a big change for a city that has long hailed its Confederate roots and led the effort that allowed white supremacists and Confederate sympathizers to regain control of Virginia’s government in 1883 and later impose Jim Crow segregation under the banner of the Democratic Party.

Confederate President Jefferson Davis and his government fled to Danville just before Union troops captured Richmond, the second capitol of the Confederacy, on April 2, 1865. With the move to Danville, the third national Confederate flag flew at the mansion that served as the capitol of the rebel cause from April 3 to April 10, 1865. The Confederate government left within a few days after Union troops forced the surrender of Gen. Robert E. Lee’s army.

The flag that came down included a broad red strip down the right side of a white field with the Confederate battle flag in the upper left corner.

Meanwhile, the Virginia Department of Motor Vehicles began the process of recalling the nearly 1,700 specialty license plates issued by the state since 2001 that bear the Confederate battle flag. The plates were created on behalf of the Sons of Confederate Veterans (SCV).

A federal judge who ordered the state to put the flag on the plates in 2001 issued an order last Friday dissolving his order and allowing Virginia to recall and destroy plates with the rebel flag. The same judge ruled two weeks ago that the state no longer has to issue the plates.

The main reason, he indicated, is a recent U.S. Supreme Court ruling that gives governments the discretion to decide what words, symbols or images will appear on license plates and other government property.

Gov. Terry McAuliffe initiated the effort to remove the racist symbol from state property when he ordered the rebel flag off the plates in the wake of the Texas decision, calling the banner a symbol of “division and hate.”

The flag plates will be removed in a slow recall. DMV said it would work with the SCV to design a new plate without the flag. Once the new plates are produced, DMV plans to send them to the 1,677 motorists.