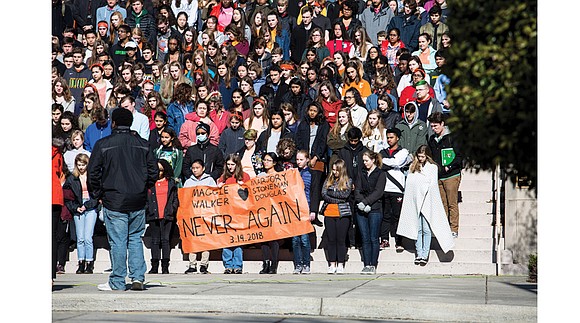 Thousands of high school students and their supporters are expected to ignore threats of discipline from their school divisions and pour into Downtown this Friday, April 20, to protest gun violence in schools and issue a fresh call to lawmakers to pass stronger gun control laws, according to police.

Part of the National School Walkout, the Richmond event is to begin with an hourlong rally at noon at Brown’s Island on the city’s riverfront, followed by a march to Capitol Square for additional speeches to rev up the crowd that organizers are projecting could top 10,000 people.

The Richmond event is among 2,000 planned across the country staged on the 19th anniversary of the 1999 mass shooting in Colorado at Columbine High School in which 12 students and a teacher were killed and 24 others were wounded.

The rally is the latest in a series of student-organized demonstrations over gun violence that have taken place since the slaying of 14 students and three staff members and the wounding of 17 others at a Parkland, Fla., high school on Valentine’s Day.

However, area school divisions, all of which will be holding classes, are not supportive of a student exodus for the rally. Students who leave would face discipline for an unexcused absence unless a parent or guardian provides a permission slip in advance, divisions are warning.

In Richmond, Superintendent Jason Kamras wants students to stay on campus and work with principals to hold peaceful events honoring the anniversary of the Columbine massacre.

“Student-led activities that are held within the school and do not disrupt instruction are permissible,” he stated in an official message to students.

“We have concluded that having large numbers of students walking off campus would pose a significant safety risk for the students themselves,” Mr. Kamras added in spelling out the school system’s position.

Just as occurred in mid-March, organizers are calling for students who don’t leave campus “to promptly walk out of class at a designated time. Sit outside your schools and peacefully protest. Make some noise. Voice your thoughts.”

Participants also are being encouraged to wear orange to associate themselves with the traditional color of National Gun Violence Awareness Day. That day is to be observed this year on Saturday, June 2, although some students plan to do so on Friday, June 1.

The rallies so far have had little impact in Virginia, where Republican lawmakers have used their slender majorities in the House of Delegates and state Senate to shoot down proposals that would have put limits on gun purchases, required stronger background checks and imposed controls or age limits on the sales of military-style weapons.

Still, ahead of Friday’s protest, authorities are sending out notices to alert the public and prepare them for dealing with the extra congestion the event could cause in the city’s center.

Virginia Capitol Police, which is marking its 400th year, is working with the Richmond Police Department to allow the rally to go forward with minimum disruption.

“The local organizers have been excellent about doing all they can to work with us to help facilitate a smooth rally,” said Col. Anthony S. Pike, chief of the Capitol Police. “Along with the Richmond Police Department and other partners, we plan to provide a safe environment for these folks to express their freedom of speech.”

Speeches, voter registration and other activities are planned at Brown’s Island from noon to 1 p.m., according to the schedule.

Then city police are to escort rally participants to the Capitol on a walking route that will take them up 7th Street to Grace Street then east to Capitol Square, where the rally is to resume at 2 p.m. at the Capitol’s South Portico.

Drivers will be allowed briefly on 9th Street between Grace and Bank streets to drop off or pick up participants at the Capitol Square rally.

“We realize that having such a large crowd at the Capitol on a weekday is a bit unusual, so we are appealing to everyone to be more patient and vigilant than usual so we can provide a safe environment for our young people,” he said.