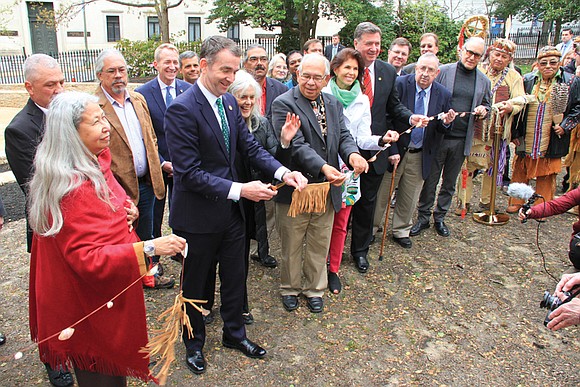 As a chilly breeze whispered through the crowd, G. Paul Nardo, clerk of the House of Delegates and a member of the commission, said it was fitting to gather for the occasion “to show our respect, to show our gratitude and to show our abiding admiration for native peoples that lived in the land called Virginia for thousands of years.”

The monument, called “Mantle,” is the culmination of an eight-year journey first envisioned to recognize the lasting legacy and significance of the original people of the state. Representatives of the 11 tribes recognized by the state attended the ceremony that celebrated the culture, contributions and significance of Native Americans.

The monument’s site — next to the Bell Tower along the 9th Street side of Capitol Square — was dedicated in April 2013, with a groundbreaking ceremony in June 2017. The monument has a stone pathway that spirals toward a small infinity fountain that is inscribed with the names of Virginia’s tribes.

“The water within the pool reflects the river culture existing within the native tribes,” said Alan Michelson, an award-winning artist who designed the monument. The winding footpath leading to the fountain and the stone wall that also serves as a bench encourages quiet introspection.

Mr. Michelson, who is based in New York, is a Mohawk member of Six Nations of the Grand River.

“Mantle is a Chief’s cloak/A pathway, water, a seat for the weary,/Remembrance of the rivers and people,/Strong from the beginning of time,/Unto eternity,/A Tribute to the First Americans,” said commission member Frances Broaddus-Crutchfield reading a poem she wrote for the dedication.

Gov. Northam told the crowd of about 150 people that the monument was a “long-overdue acknowledgment.”

“The memorial is a symbolic tribute to Native Virginians past, present and future and a magnificent creation,” he said. “My hope is that progress, and the completion of this monument, will begin our journey toward healing.”

Ken Adams, chief emeritus of Virginia’s Upper Mattaponi tribe, concluded the ceremony by leading a prayer to God and blessing the monument.

“As we celebrate you and celebrate the legacy of Native Americans,” Chief Adams said, “as we place this memorial in your honor on these grounds, we cannot ever thank you enough for bringing us out of the dark ages that we experienced not so long ago.”

Money for the $675,000 project was raised largely by the Virginia Indian Commemorative Commission and the Virginia Capitol Foundation.

After the ceremony, Delegate McQuinn was embraced by Carolyn “SunFlower” Talley and her daughter, Tawanda “Pretty Dove” Talley. The two affirmed the event as a special and historic moment in their lives.

“We think this is such an honor to be a part of the day,” said Tawanda Talley. “We, our tribe, appreciate this memorial. It is greatly appreciated, yet long overdue.”

Yasmine Jumaa of the Capital News Service contributed to this report.