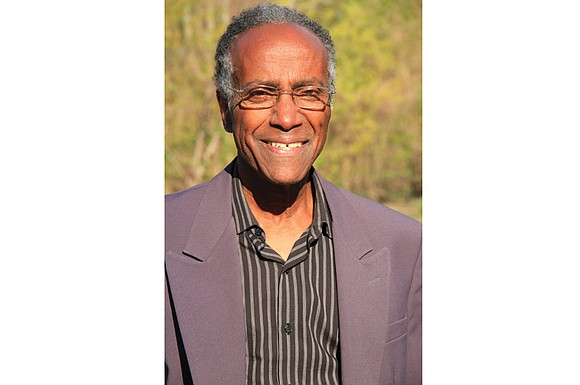 Every spring, there is a great migration that one Bryan Park volunteer anticipates and anxiously looks forward to.

Adolph White is Bryan Park’s top caretaker for the purple martin nesting site. The birds, with a wing span of up to 12 inches, are the largest members of the swallow family.

According to the Purple Martin Conservation Association, these birds spend their non-breeding season in Brazil and then, starting in January, migrate through Central America and Mexico to the United States, island hop across the Caribbean, or follow Central America then cross the Gulf of Mexico to Louisiana, Florida and up the Eastern Seaboard as far as Canada, to nest.

Typically, they arrive in Richmond by March 15. But with the weather being so cold this year, they arrived later, Mr. White says.

Mr. White’s interest in purple martins started with an accidental meeting nine years ago in Shockoe Bottom with Jimmy Fitzgerald, a friend from Providence Forge.

Annually, thousands of purple martins migrate to Richmond and roost Downtown in Shockoe Bottom. They roost and fly in such large numbers, he explains, because that helps to evade predators like hawks and owls. “Mr. Fitzgerald would sit — he didn’t like standing — on the corner of Main Street between 13th and 17th streets and watch the purple martins in the trees,” Mr. White recalls. “Purple martins always flocked in large numbers there.

“I asked him what he was doing and he told me he had raised $900 and was planning to build bird houses for purple martins at Bryan Park and he couldn’t manage it,” Mr. White says, “so I took over.” Mr. White was invited to Mr. Fitzgerald’s home, where he had a colony of purple martins roosting in his backyard.

Purple martins, he explains, are glossy aerial acrobats with forked tails. They are the only species of bird entirely dependent on humans for housing, he says.

“When they start to fledge, or bring up their babies until they can fly, there is a lot of chit-chatting and flying around. It gets pretty noisy.”

He began to study the birds and how hawks and other predatory birds operate. The greatest time of peril for purple martins is when they are roosting in their man-made birdhouses. The sharp-shinned hawk, red tail hawk and Cooper’s hawk have long toes and talons adapted to catch and eat other birds. The Cooper’s hawk has the ability to hover when catching their prey.

“Hawks, like fighter pilots, want to make a clean attack,” Mr. White says. “However, they don’t want to see all of the confusion that purple martins can cause when they fly together.

“The hawk dives from a high altitude at speeds of 50 to 60 miles per hour, looking for a lone bird and wants to get in and grab the bird and get out by quickly turning skyward before hitting the ground.” Since getting involved nearly a decade ago, Mr. White has designed and built three birdhouses that sit on 20 foot poles located just a few feet from the lake in Bryan Park. Each birdhouse has two floors and two entrances on each floor.

To prevent hawk attacks, each house is surrounded entirely with wire caging. The wire allows the purple martins to get in to roost on the birdhouse perches, but is extended far enough from the birdhouses to keep hawks and other predators from reaching in and grabbing a bird. Bryan Park is not alone. There’s a growing national awareness and effort to assist purple martins, Mr. White notes.

The Purple Martin Conservation Association, a nonprofit organization based in Erie, Pa., and founded in 1987, has seen an upswing in participation on its online forums since its website was introduced in 2003. More than 3,000 people have posted questions and comments on 15,000 topics related to attracting and caring for purple martins, according to the website.

Other organizations have emerged in recent years, including the Purple Martin Society of North America and the Purple Martin Preservation Alliance. Countless blogs and YouTube videos also are devoted to purple martins.

Observing nature was routine for Mr. White, when he was growing up in Surry County and living and helping out on his family’s peanut farm.

There wasn’t a whole lot to do, he says. He would walk through the woods observing and being a part of nature.

“You would be surprised how much you will see if you really paid attention to nature,” Mr. White says. “Observing and taking care of these birds helps me to continue to realize how peaceful nature really is.”

No. 1 volunteer position: Caretaker of the Bryan Park nesting site for purple martins.

Date and place of birth: Feb. 14 in Surry County.

Purple martins are: The largest member of the swallow family. They are insect eaters. They leave Brazil in the Amazon and fly about 6,000 miles north. They come to North America to raise their young during Brazil’s rainy season so their eggs will not rot and their nest will not disintegrate. They had to come to North America, which is an ideal place for them to raise their young.

Purple martin nests are made of: A purple martin nest is usually low profile in nature and, depending on the area, will start out with pine straw (dried pine needles) or wheat straw (the stalks of harvested wheat) or whatever is available for that region. Many will even contain small sticks.

Purple martins’ diet: They only eat flying insects. These birds are very agile and do a 180-degree turn to grab an insect.

When and why I became interested in the birds: When I lived in Surry County, I was basically a nature person. I always walked through the woods in spring and looked at the bird nests. I paid attention to different bird sounds and I learned a lot about birds. When I came to Richmond, I discovered purple martins roosted Downtown in Shockoe Bottom, about 3,000. They gather in this large number because it helps to evade predators like hawks. I met Jimmy Fitzgerald who had a colony and he told me he was planning to put up a house at Bryan Park and he couldn’t manage it, so I took over.

My role in encouraging them: I have built bird houses near the lake in Bryan Park. The lake is a source for food because of the high concentration of insects in and near the water.

Why I enjoy them: They are interesting birds and very colorful, with different shades of purple.

What needs to be done to better protect them: People can hang purple martin gourds in their yards. The gourds are more of an ideal living situation than homes. However, simply because gourds lack a porch does not mean that they provide complete predator protection.

What others can do to help: They can study the birds and come out to Bryan Park to observe them in their habitat.

How I start the day: I get up in the morning and think of the question I had in my head the night before. Then I grab my computer to research an answer.

A perfect day for me is: Every day is perfect.

Something I love to do that most people would never imagine: Dating another birder.

How I unwind: I do special types of exercises that keep me fit.

The top of my “to do” list is: Mostly working with the purple martins and making sure I have enough money to spend to do other projects.

The best thing my parents ever taught me: How to save money.

The person who influenced me the most: When I was a child, I talked to my Sunday School superintendent, Mr. Mason, about books I read. He helped me get into Virginia Union University.

The book that influenced me the most: “The Enzyme Factor” by Hiromi Shinya.

What I’m reading now: “The Human Nature of Birds” by Theodore Barber.

My next goal: To keep things going just the way they are.