Charlottesville confronts identity, braces itself, one year after clashes 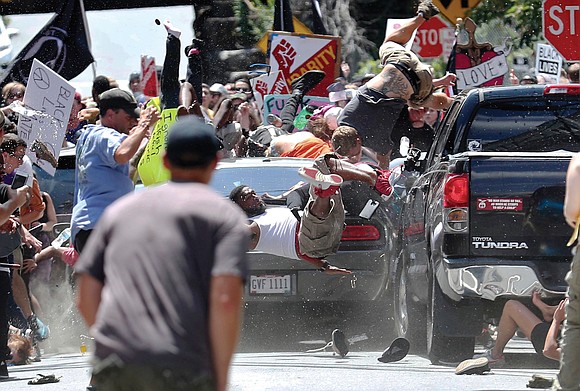 For many residents of Charlottesville, last year’s white nationalist rally shattered the city’s carefully curated reputation as a progressive, idyllic place to live.

But for Nikuyah Walker, an activist who was elected mayor just three months later, the violent clashes only underscored deep racial and economic inequities that have long divided this picturesque college town. In her view, the rally has forced Charlottesville to confront its own complicated legacy.

“You can have three or four generations who are struggling, and that family has not been able to move out of poverty wages – that’s a significant portion of Charlottesville,” Ms. Walker, the city’s first black female mayor, said outside City Hall. “And then you have this very wealthy community that loves and raves about it.”

As Charlottesville braces for the one-year anniversary this weekend, it is still agonizing over the August 2017 clashes in which one woman was killed when an Ohio man drove his car into a crowd of counter-protesters.

Some residents have argued that the vast majority of the marchers last year were from out of town, but Ms. Walker said that narrative ignores the city’s broader problems.

She noted that the main instigators of the “Unite the Right” rally, Richard Spencer, who coined the term “alt-right” to describe the loose coalition of white nationalists, and Jason Kessler, a local blogger, graduated from the University of Virginia on the western side of town.

The rally was billed as a protest over the City Council’s plan to remove two Confederate statues from downtown parks. Last year, a judge blocked the city from taking down the statues, which are encircled by orange plastic fencing and are off limits to residents.

Several officials including the police chief, the city manager and the city attorney left their positions after widespread criticism that Charlottesville had been ill-prepared to manage the hundreds of white nationalists who descended upon it, many armed with shields, clubs and other weapons.

“We recognize that we have to earn the community’s trust,” said Brian Wheeler, the city’s chief spokesman. “The way that we can best do that this year is learn from the mistakes.”

Local and state police have vowed to have zero tolerance for any violence this weekend, in stark contrast with last year when some officers did not intervene to break up fights. Virtually the entire downtown will be closed to vehicles.

Police have said that they are preparing for the worst, even though Mr. Kessler, who organized last year’s event, lost a bid to get a permit this year. Instead, he has received permission to rally outside the White House on Sunday and has said he will focus on Washington.

The effects of last year’s violence are still felt every day in Charlottesville.

City Council meetings have frequently devolved into shouting matches. At a recent community outreach meeting where police officials detailed security plans for this weekend, residents asked one after another how they were supposed to trust the police after 2017.

“Charlottesville has had a tendency to self-congratulation; it’s constantly in the magazines as the best place to live,” said the Rev. Will Peyton, who oversees St. Paul’s Episcopal Church.