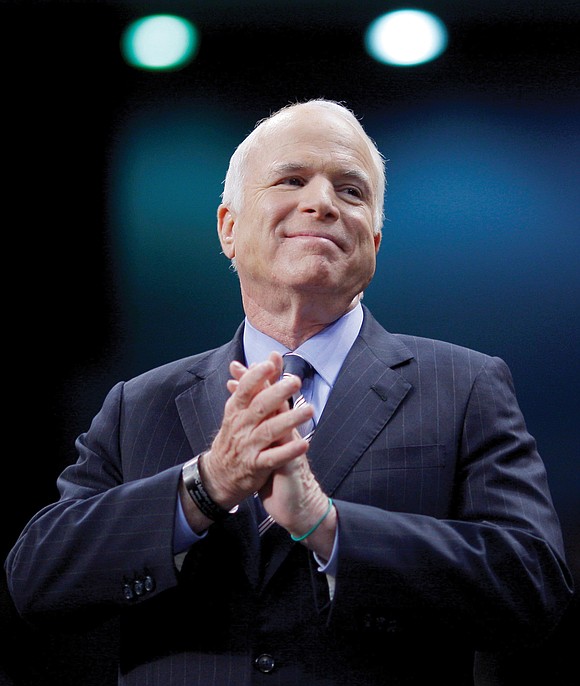 U.S. Sen. John McCain listens as he’s introduced at an October 2008 campaign rally in Fayetteville, N.C., during his run for president against then-Sen. Barack Obama. Photo by Reuters Brian Sydner/Reuters

Former Presidents Barack Obama and George W. Bush will deliver eulogies Saturday at the funeral of U.S. Sen. John McCain, a former prisoner of war during Vietnam and six-term Republican senator from Arizona whose reputation as a maverick is causing a stir even after his death.

Sen. McCain, 81, had been suffering from brain cancer since July 2017 and had not been at the U.S. Capitol this year. He died on Saturday, Aug. 25, 2018, at his ranch in Arizona with his wife, Cindy, and other family members at his bedside.

Described as affable and cantankerous, the decorated war hero and chairman of the Senate Armed Services Committee frequently battled with President Trump over policy and practices, including his critical late-night vote on July 27, 2017, blocking President Trump’s attempt to dismantle the Affordable Care Act, or Obamacare. By voting against President Trump, Sen. McCain saved health care for millions of people.

Two White House officials said Sen. McCain’s family had asked before his death that the president not attend the funeral services.

Instead, Sen. McCain asked the two men who defeated him in his two unsuccessful bids for the White House to speak at his funeral service at Washington National Cathedral.

“These were bitter contests, both of them,” said U.S. Sen. Jeff Flake, R-Ariz., and “to ask them to speak at your funeral — and for them to be honored at the opportunity — that tells you all you need to know.”

Following funeral events in Arizona, including a service on Thursday at which former Vice President Biden is to speak, Sen. McCain’s body will be flown to Washington, where he will lie in state in the Capitol Rotunda on Friday with a formal ceremony and time for the public to pay respects.

On Saturday, the procession will pass the Vietnam Veterans Memorial and head to the funeral at Washington National Cathedral. A private funeral is planned for Sunday at the U.S. Naval Academy in Annapolis, Md.

Flags at the White House flew at half-staff on Sunday, but on Monday morning, President Trump ordered them to be raised, touching off a hailstorm of criticism from veterans groups, lawmakers from both political parties and the public, who felt the president’s actions were disrespectful.

President Trump glowered in public and was near silent for two days before relenting under pressure Monday by tersely recognizing Sen. McCain’s “service to our country” and re-lowering the White House flag.

Before President Trump’s Monday afternoon statement, his only commentary on Sen. McCain’s death had been a perfunctory tweet last Saturday. Just a few weeks ago, the president signed into law a defense bill named in honor of the senator without a single mention of his name.

In death, Sen. McCain himself had more to say. In a final letter released Monday, Sen. McCain appeared to repudiate President Trump’s politics one last time, saying, “We weaken our greatness when we confuse our patriotism with tribal rivalries that have sown resentment and hatred and violence in all the corners of the globe.”

Sen. McCain, a traditionally Republican foreign policy hawk, was admired in both parties for championing civility and compromise during an era of acrid partisanship in U.S. politics. But he also had a famous temper and rarely shied away from a fight.

The son and grandson of U.S. Navy admirals, Sen. McCain was born on Aug. 29, 1936, at an American naval installation in the Panama Canal Zone — U.S. territory at the time — where his father was stationed.

He graduated from the U.S. Naval Academy and flew attack planes off aircraft carriers during the Vietnam War. In October 1967, his A-4 Skyhawk was shot down on a bombing mission over North Vietnam’s capital and he suffered two broken arms and a broken leg. A mob dragged him from a lake, broke his shoulder and stabbed him.

Held at the notorious “Hanoi Hilton” prison and other sites, Sen. McCain was beaten and tortured, suffering broken bones and dysentery. He was released on March 14, 1973, but left with permanent infirmities.

He divorced his wife, Carol, after 15 years of marriage in 1980, and weeks later married Cindy Henley, daughter of a wealthy beer distributor in Arizona.

He was elected to the U.S. House of Representatives in 1982 after more than two decades of Navy service.

Arizona next elected him to the U.S. Senate in 1986 to replace Barry Goldwater, the 1964 Republican presidential nominee revered by conservatives.

A dark period for Sen. McCain came as one of the “Keating Five” group of senators accused of improperly intervening with federal regulators to help political contributor and bank executive Charles Keating, whose Lincoln Savings and Loan failed in 1989, costing taxpayers $3.4 billion.

Sen. McCain was cleared of wrongdoing in 1991 but the Senate Ethics Committee rebuked him for poor judgment.

In Congress, Sen. McCain prided himself on his history of working across party lines on immigration, climate change and campaign finance reform. He is credited, among other things, with helping to rebuild U.S. ties to Vietnam.

He supported President Bush’s 2003 invasion of Iraq, but also spoke out against the Bush administration’s use of waterboarding, a type of simulated drowning widely considered torture, and other extreme interrogation tactics in the aftermath of the Sept. 11, 2001, attacks.

In running for president in 2008, he tried to succeed fellow Republican Bush at a time when the United States was mired in wars in Afghanistan and Iraq, and stuck in a financial crisis.

It was a stark contrast between Sen. McCain, then a 72-year-old veteran of Washington, and the 47-year-old Sen. Obama, who was offering a “Yes, we can” message of change.