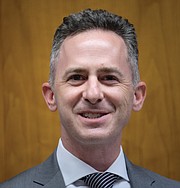 Richmond Public Schools will need to beef up its budget with an added $150 million over five years to help implement its strategic plan to bolster city schools.

Superintendent Jason Kamras presented the Richmond School Board with the cost estimate for the first time during its meeting Monday night.

The board approved in late September the administration’s Dreams4RPS strategic plan not knowing the cost, which would require an average of $30 million more annually through 2023, or an added 10 percent per year, in the RPS operating budget.

According to the strategic plan, about $37 million would be pumped into improving teacher salaries by revamping the current pay plan; $92 million would go toward boosting the curriculum, including hiring 40 teachers for coding, foreign language and visual and performing arts courses for elementary students and transforming three high schools and middle schools into themed schools; $10.4 million for new school construction; and $6.65 million for more school nurses, mental health and social worker positions.

Mr. Kamras said the goal is to have all 44 of the city’s public schools to be fully accredited by 2023, with the school administration setting baseline target goals to be met each year.

The Virginia Department of Education’s “Memorandum of Understanding, which established what RPS needs to do to become fully accredited, is our performance measure for the additional dollars in the plan. The MOU gives us a framework of where we need to go,” said School Board member Cheryl Burke, 7th District.

Board Chairwoman Dawn Page, 8th District, reminded the board that when requesting the additional funds from City Council, “we have to be very clear and intentional, as well as demonstrate our willingness to tighten our belts and be more efficient.”

Board member Jonathan Young, 4th District, argued that the plan is not affordable.

“Richmond needs this strategic plan,” Mr. Young said. “However, money doesn’t grow on trees. In order to get the requested funds, RPS has to have some tradeoffs and make some significant cuts.”

He suggested that the board revisit several efficiencies he proposed earlier this year that he said will reduce central office costs by $7 million per year.

Mr. Kamras reminded the board that “quality education is expensive” and that if the board wants a world-class education system, “we will have to find the funds to pay for it.”