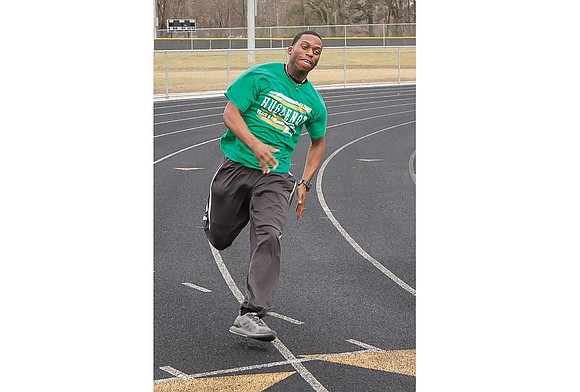 At the Bojangles restaurant where he has a part-time job, Tailey Tofoi good-naturedly refers to himself as “The Biscuit Man.”

On the running track, the Huguenot High School junior has come to be known as one of the fastest young runners around Richmond—and perhaps in all of Virginia.

“I love to feel the wind in my face when I run. It feels good,” he said.

Tofoi would be an interesting story even if he couldn’t outrun his competitors to the finish line.

For starters, there is a fashion statement. The 5-foot-8, 150-pound Falcon wears a gold necklace — a family heirloom — with a pendant shaped like the African continent.

Tofoi was born in the Liberian capital of Monrovia on Africa’s west coast. Along with his parents and siblings, he moved across the Atlantic to Central Virginia when he was just a tot.

“I don’t remember anything before second grade,” he said. “But we’ve got family all over” the United States.

Among his first memories are playground races around his home and elementary school.

“I saw I could run faster than the others,” he said.

It didn’t stop there. He excelled in a low-profile track and field program at Richmond’s Boushall Middle School.

“I think I won everything but the shot put,” he recalled.

That set the stage for his Huguenot High debut.

“He has tremendous natural ability. Plus, he’s willing to do any workout you give him on his own. He has a great work ethic.”

Tofoi enjoyed his brightest day ever in spikes on Feb. 8 at the Division 4, Region 5 meet at the Arthur Ashe Jr. Athletic Center.

“Tailey will continue to improve,” Coach Fuller said. “We’re building for the future. Next year, watch out!”

Next up this winter is the state Indoors 4A meet Feb. 23 and 24 at Roanoke College in Salem. Tofoi is a serious contender in the 55 meters and 300 meters.

Outdoors this spring, he’ll transition to 100 meters and 200 meters for sure, and might also kick up his heels in the 400 meters, in which he has already broken 50 seconds on a relay.

Tofoi is the son of Dewin Tofoi, an employee at Moody Middle School in Henrico County, and Amos Tofoi, who is retired. An older sister is a recent Huguenot grad, while a younger brother is next door at Elkhardt-Thompson Middle School.

As one might expect, Tofoi is also a promising football player despite never having played the sport on an organized level prior to Huguenot. Because of complications, he did not play football this past fall, but plans to as a senior.

Between classes and track, he worked during the past year at Bojangles on Hicks Road in Chesterfield County.

“I do a lot of different things there,” he said, “but they call me ‘The Biscuit Man.’ That’s my title.”

If the Falcon flash produces tasty biscuits as quickly as he wins track medals, hungry customers should be well satisfied.