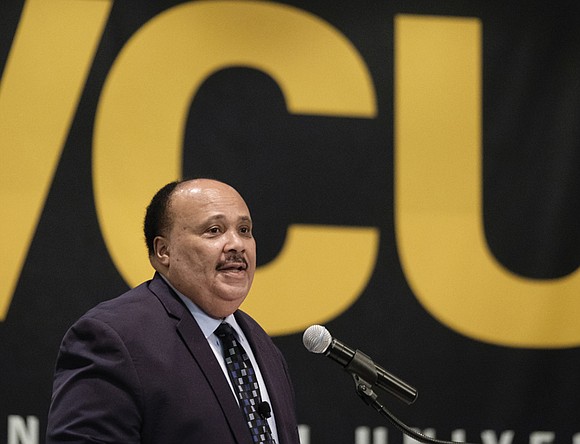 Martin Luther King III commends Florida students for their stand against gun violence and the impact of gun violence on his life during his talk Sunday at Virginia Commonwealth University. Ava Reaves

Be guided by your dreams, not distracted by your fears.

This was the message that Martin Luther King III offered to students, faculty and the community during his talk Sunday evening at Virginia Commonwealth University.

“Young people, you are the hope of the future,” Mr. King said. “Remember, every great leader, including Martin Luther King Jr., was once a young person who had doubts about what he or she could do. But they persevered with courage. Be courageous.”

Mr. King is founder and president of Realizing the Dream Inc., a nonprofit engaged in anti-poverty and global peace initiatives as an expansion of the work of his noted late parents, Dr. Martin Luther King Jr. and Coretta Scott King.

His talk at VCU, part of the university’s annual Martin Luther King Jr. Celebration Week, was rescheduled from January because of snow.

He commended students at Marjory Stoneman Douglas High School in Parkland, Fla., for taking a stand against gun violence following the Valentine’s Day mass shooting at their school where a former student, armed with an AR-15 military-style rifle, killed 17 people.

“We can say it’s mental illness, but maybe it’s the climate that exists within our nation,” Mr. King said. “We have certainly created and sustained a culture of violence. Until we begin to change the culture, we’re not going to address these issues.”

Mr. King talked about his own experiences with gun violence. His father, Dr. King, was assassinated 50 years ago in Memphis, where he was advocating for striking sanitation workers. Six years after his father’s death, his grandmother, Alberta King, was gunned down in Ebenezer Baptist Church in Atlanta by a man who intended to kill his grandfather.

“It did not deter me or distract me because I had to learn to dislike the evil act, but still love the individual,” he said. “I’m thankful for the spirit of love that teaches you to forgive. We need more of that attitude and behavior in our nation. It doesn’t take but a few good women and men to bring about change.”

He recounted how his mother taught him and his siblings that their father’s dream for America was shared by millions of people in the United States and all over the world.

“While nothing could take away the pain of losing my father at such a young age, there was some comfort in knowing that he was loved by so many people of all races, religions and nations,” he said.

Even 50 years after his father’s death, people use the King holiday as a day of service to others, he said.

“We celebrated a dream that everyone can share — a dream of Americans of all races, religions, and cultures reaching out to one another and working together to build new bridges of understanding, goodwill and cooperation,” Mr. King said. “In spite of all the divisions and animosity that plague our society, we still hold out the hope that reconciliation, even brotherhood and sisterhood, are still possible.

“We are called to do something every single day to … fulfill the dream.”

He said the ideals of freedom, justice and nonviolence championed by his father have a special resonance for Virginians in the wake of the bloody protests by white supremacists and neo-Nazis in Charlottesville last August in which 32-year-old Heather Heyer was killed and dozens of others were injured when a Confederate sympathizer drove his car into a crowd of counterprotesters.

“We’re a better society, a better nation, than the behavior that we’re exhibiting right now,” Mr. King said. “We have to find ways to inoculate America’s young people, in particular, to resist the toxic virus of racism, sexism, classism, homophobia, anti-Semitism, xenophobia and all forms of bigotry, which too often thrive where there’s poverty and social neglect.”

He urged the audience to make a firm commitment to nonviolent resistance.

“The haters and exploiters want counterdemonstrators to get suckered into practicing violence so they, too, can be demonized and discredited,” he said. “The moment an individual commits violence, even for a good cause, that person’s credibility is shredded. The quickest way to surrender your personal dignity and credibility is to engage in violence.”

He said despite the Charlottesville tragedy, he was encouraged by the results of November’s elections in Virginia in which voters, he said, rejected fear mongering and immigrant bashing, and upheld the spirit of tolerance, diversity, hope and healing.

“The rhetoric that Mr. Trump espouses is divisive,” he said of the president, “but it also clearly gives people a perception of who he is.

“We need to appeal to his heart,” he said. “If we can change and transform a George Wallace of Alabama, we certainly can work on the heart of President Trump.”