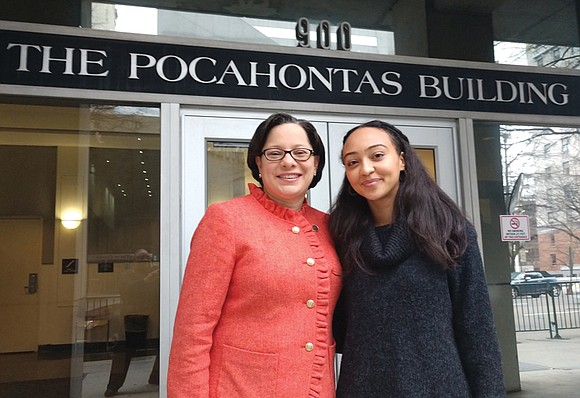 More than 400 years after Pocahontas’ burial at St. George’s Church in Gravesend, England, near the mouth of the River Thames, the Pocahontas Project will honor and tell her real life story.

The theatrical project, “Gravesend,” uses the Native American’s life story as the centerpiece for a multilevel academic and community program designed to inspire hope and purpose for the audience.

The play, written by Londoner Kieran Knowles, is slated for its global premiere in Virginia in July.

British actress Yasmine Hassabu, who will portray Pocahontas, was in Richmond last week as part of her research for the role.

“The real history of (Pocahontas) is so fascinating and so rich,” the 27-year-old Ms. Hassabu said during a Free Press interview. “I don’t know why someone would go down a fairy tale route like Disney has done.

“What Pocahontas stands for — the power, the strength and bringing communities together — makes the play very hopeful.”

During her stay in Richmond, Ms. Hassabu visited with Sen. Jennifer L. McClellan of Richmond at the Pocahontas Building off Capitol Square where General Assembly members now have their offices.

She also was slated to see the portrait of Pocahontas that hangs in the Governor’s Mansion; tour the newly renamed Virginia Historical Society on the Boulevard, now the Virginia Museum of History & Culture with Pocahontas expert Bill Rasmussen; visit Henricus, the early English settlement along the James River where Pocahontas lived for a while and converted to Christianity; and meet with students at Franklin Military Academy in Richmond’s East End.

Students from Franklin Military Academy, who traveled last year to Gravesend, England, with the Pocahontas Project, met Ms. Hassabu during a table reading of the play. They were accompanied on the trip, organized by Richmonder Rick Tatnall, founder of Replenish Richmond, by Virginia Indian Chiefs Steve Adkins, Ken Adams and Anne Richardson.

“The Virginia tour will add to Yasmine’s understanding and appreciation for Pocahontas as she visits and explores where Pocahontas was born, raised and developed into one of the most influential women in history,” Mr. Tatnall said.

The daughter of Chief Powhatan, who was head of a network of tribal nations in Virginia’s Tidewater region, Pocahontas was noted for her association with the colonial settlement at Jamestown.

Historically, she is known for saving the life of John Smith in 1607 by placing her head upon his own when her father raised his war club to execute him. In return, Capt. Smith established trading agreements with the tribes.

In 1614, she converted to Christianity and was baptized “Rebecca,” marrying colonist John Rolfe in April of that year. The marriage led to the “Peace of Pocahontas,” a peace treaty between the English and the Powhatan Indians that lasted until 1622.

In 1616, she traveled to England with her husband and infant son, Thomas, and became ill and died in 1617 while en route back to Virginia. She was 22 and was buried at Gravesend.

Theories abound about the cause of her death, ranging from pneumonia, smallpox and tuberculosis to poisoning.

The play, “Gravesend,” is slated to open at the Thomas Calhoun Walker Education Center in Gloucester, close to Werowocomoco, the tribal headquarters of the Powhatan tribe where Pocahontas was born and raised. More than 20 performances are to be scheduled around Virginia.

One of the Pocahontas Project’s goals is to “share the experience” with schoolchildren through donations for youngsters to see the play during the Virginia tour.

“Theater is so motivating, inspiring and creates hope in people,” Ms. Hassabu said. “But a lot of the time, the people who should see the story, or who the story is all about, are the people, for whatever the financial reason, cannot go.”