Bond fund to help people stay out of jail 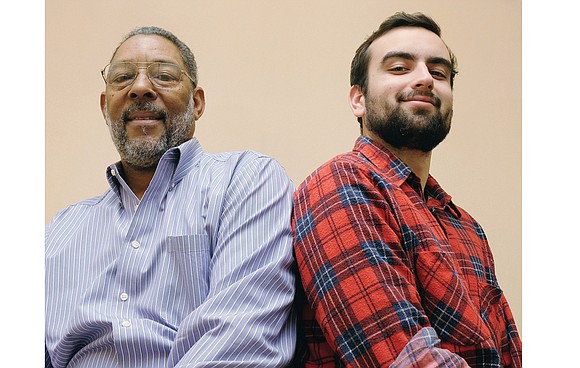 Matthew F. Perry Jr., right, is founder of the Richmond Community Bail Fund that operates with the help of volunteers such as Nathan Beyah

Get arrested and you could lose your job, your home, custody of your children and anything you own if you can’t raise bail money.

That’s because you’ll stay in jail awaiting trial — a reality that daily involves untold numbers of people in Richmond and across the state whose pre-trial detention disrupts their lives, crowds jails and costs taxpayers who pay for their care.

That’s intolerable to Richmond native Matthew F. Perry Jr., who has come up with a solution to help people who are presumed innocent get out of jail before trial.

His solution: Create a fund that would provide money to cover bond without any cost to the arrested person. That would help people without money stay out jail as they go through the court process.

And that solution is now in operation in Richmond.

The 20-year-old junior at New York University has teamed with the fledgling Business Coalition for Justice, or BCJ, to start the Richmond Community Bail Fund.

The fund, patterned after the original Freedom Fund in Bronx, N.Y., and similar funds in 30 other cities, already has been used to bail out two people charged with drug offenses and is now seeking to boost the number of people helped.

Mr. Perry said he learned about the Bronx fund as a freshman at NYU and spent the summer of 2016 as an intern with the fund. He wanted his hometown to have something similar.

At this point, the Richmond Community Bail Fund is all volunteer, operating via cell phone and email. Among those involved are Alex Mejias, a business strategist and founder of BCJ; his wife, Ashley Mejias; Nathan Beyah, a contractor; and Matthew F. Perry Sr., Mr. Perry’s father and president of Riverside Outfitters.

“We are working with the Public Defender’s Office and reaching out to community organizations to let them know about us,” said Mr. Perry.

The goal is to raise more money so that the number of people helped and the size of the bonds that are handled can grow, Mr. Perry said.

The fund also plans to advocate for an end to cash bail that traps a higher percentage of African-Americans, he said.

The fund, itself, does not bond people, Mr. Perry explained. Instead, a fund volunteer is provided money to post the bond as an individual, reducing some of the complexity.

If the arrested person fails to show up for court, the fund either has to find that person and return them to jail or forfeit the money.

He said that a study of the existing funds shows that 95 percent of those who are bailed out come to court when required.

That statistic is a major reason that Richmond Commonwealth’s Attorney Michael N. Herring and his staff have encouraged city courts to release more people on a promise to return to court instead of requiring them to post bail.

Although it doesn’t apply to everyone, Mr. Herring has backed releasing without bond people arrested for nonviolent offenses and whose bonds would be less than $10,000.

Mr. Herring, as well as now retired Richmond Sheriff C.T.Woody Jr., have promoted other strategies to keep those charged with lower level offenses out of jail before trial, including a drug court, a day-reporting center and increased use of ankle monitors. Such programs have helped reduce the population of the Richmond city jail.

Despite such efforts, Mr. Perry said plenty of people still find themselves, though presumed innocent, stuck in jail.

Mr. Beyah said that the bail fund is needed for people with few resources who would struggle to pay even a small amount to a professional bail bondsman.

While professional bonders usually require payment of 10 percent of a bond, most do not want to deal with people with low bonds, he said. “Most won’t get involved if the payment is $100,” he said. “They don’t think it’s worth their time.

“While $100 might not be a barrier for most people, it might as well be a million dollars for others. That’s how strapped they are,” Mr. Beyah said. “That’s where we can come in.”

Details and information for those needing help, as well as for those seeking to help: https://rvabailfund.org or Facebook at Richmond Community Bail Fund, (804) 601-4944 or email rvabailfund@gmail.com.