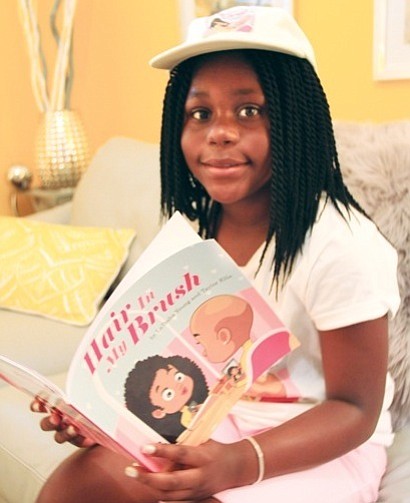 Taylor Ellis, 10, author of “Hair in My Brush” reviews a copy of her book about a young African-American girl who is diagnosed with alopecia. Ronald E. Carrington/Richmond Free Press

Taylor Ellis never missed a day as a student at Carver Elementary School, and when she graduated from the Richmond Public School three weeks ago, she did so with a 3.9 grade point average, the highest in her class.

Taylor, 10, also won awards from her school principal and the district’s superintendent, in addition to earning a spot as a graduation speaker.

Two days before graduation, Taylor celebrated more good news. “Hair in My Brush,” a book that she authored with her mother , LaTesha Young, was published. The children’s book tells a powerful message that reflects the loss of Taylor’s hair six months ago.

In September 2017, Taylor was diagnosed with alopecia, a noncontagious condition of hair loss thought to be caused by the body’s immune system attacking the hair follicles.

“I wrote the book to encourage people and to prevent teasing and bullying,” Taylor said in a recent Free Press interview.

Alopecia begins with a sudden appearance of round or oval patches of hair loss. Those patches are slick or smooth, without scaling or broken hairs.

The book’s main character, Briana, a young African-American girl, is a reflection of Taylor’s journey dealing with her diagnosis and discovering, with the help of her mother, that her hair does not define her.

The young daughter and her mother take a journey together showing that, regardless of her loss of hair, Briana is smart, beautiful and capable of anything.

Last September, as Taylor was starting fifth grade, she was diagnosed with alopecia after her mother noticed small bald spots in the back of her head that started to appear when combing her hair.

“After she was diagnosed, I found out it was genetic on (her father’s) side of the family,” Ms. Young said while seated next to her daughter during the Free Press interview.

“Her paternal great-grandmother, great- aunt and grandmother had alopecia and I had no idea what it was when it was happening to Taylor,” Ms. Young said.

Kevin Ellis, Taylor’s father, said that his mother lost her hair at age 28, and “has been dealing with it for more than 40 years.”

“If this had happened to her when she was 18 or 19, it would have been different because of the many type of ways you can wear your hair,” said Mr. Ellis, adding that it was difficult when he learned of his daughter’s diagnosis. “I was so sad and it bothered me a lot.”

“When people see children with alopecia, their first thought is that they are sick or have cancer,” she said.

She mainly feared that other children would tease Taylor because they did not understand her diagnosis.

While researching alopecia, the mother and daughter discovered there were no books for elementary-age children of color and no physical support groups in the Richmond area.

She researched the National Alopecia Foundation website and found that the closest support group is in Reston, Va.

The news disappointed and alarmed the family.

“The book was written because kids at school were not really nice to her when they found out her hair was falling out,” Taylor said . “I wanted them to understand how I felt and what alopecia is.”

Now her friends at school think “Hair In My Brush” is a great book because it helps people understand the condition.

During a June 30 book signing, a steady stream of friends, family, neighbors and classmates came out to purchase autographed copies of the book.

“There has been a lot of word-of-mouth support in Richmond,” Ms. Young says. “I received a delivery the Wednesday after the book was published and can’t keep it in stock.”