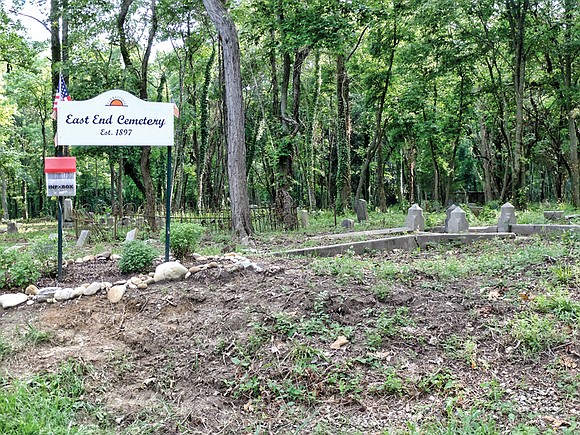 The Friends of East End Cemetery are marking the five-year anniversary of cleaning up and restoring the historic African-American burial ground in Eastern Henrico County.

“In that five years, we have cleared about eight of the 16 acres of its original overgrowth and uncovered almost 3,000 grave markers, making it possible for families to visit the graves of relatives,” according to John Shuck, who launched the volunteer effort in 2013.

That’s a big step forward for the long-abandoned private cemetery that dates to the mid-1890s and is believed to be the burial ground for about 17,000 people.

The cemetery at 50 Evergreen Road in Henrico County borders the better known and larger Evergreen Cemetery, which sits on the Richmond side of the boundary line. Dating to 1891, Evergreen is where Maggie L. Walker, John Mitchell Jr. and other greats are buried along with thousands of ordinary black citizens.

The two private cemeteries have been neglected for decades, and volunteers like Mr. Shuck have largely led efforts to clear out vines, bushes, weeds and trees that have overtaken the plots.

With help from the state, the Richmond-based EnRichmond Foundation has purchased the 60-acre Evergreen and begun efforts to improve maintenance. The foundation also has filed petitions with the Henrico Circuit Court to gain ownership of East End Cemetery.

Mr. Shuck, who became interested in the cemeteries after retiring to the Richmond area, started his volunteer work in Evergreen 10 years ago, but then shifted to East End.

He said “it took almost 8,000 volunteer visits and 360 scheduled work days” to clear half of East End, including work last weekend.

He said multiple community groups have taken part through the years, but he also cited the work of a small cadre of regular volunteers, such as Bruce Tarr who has worked with him since 2013.

Mr. Shuck said sporadic donations have enabled the Friends of East End to pay for taking down some of the trees that threaten the gravesites, but more financial help is needed.

He said the group will apply to the state for support. The state has set aside money for tending historic African-American cemeteries, including Evergreen and East End, and a new law, effective July 1, allows groups such as the Friends of East End to apply for funding.

Mr. Shuck said the Friends of East End welcomes anyone interested in helping maintain the cleared areas or clear the acreage that is still overgrown.