Breaking up is hard to do.

In the midst of a conference transition, Hampton University’s 2018 football schedule bares slim resemblance to those from the previous 100-plus years.

The Pirates are moving this school year to the Big South Conference after being aligned with the historically black CIAA from 1912 to 1995 and MEAC from 1996 to 2018.

Hampton becomes the Big South’s lone historically black affiliate. The Big South is a member of the NCAA Football Championship Subdivision (FCS), as is MEAC.

HU is clearly feeling short-term pain for what officials hope will be long-term gain.

Also, in joining the Big South last November, there wasn’t time to form a full Big South football schedule for 2018. Among this fall’s foes, only Monmouth (N.J.), Charleston Southern and Presbyterian (S.C.) are Big South members.

The Pirates plan to play a full Big South schedule in 2019.

This leaves HU with a mismatch 11-game schedule that may cause longtime Pirates fans to shake their heads. 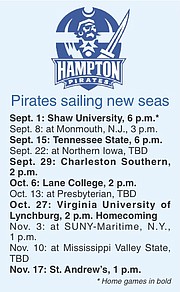 In a prepared statement, here is what HU President Dr. William R. Harvey said of the unusual schedule:

“Despite the opposition from certain quarters, it’s with great pleasure we announce the 2018 football schedule. We appreciate the patience of fans and the assistance of many people to get a schedule for this fall.”

The closest traditional foe is CIAA member Shaw University, the season-opening opponent at Armstrong Stadium. The Pirates are 24-9-2 overall against the Bears but they haven’t met since 1978.

The host Pirates figure to be the heavy favorite for a homecoming victory Oct. 27 against VUL (formerly Virginia Seminary). The Dragons were 0-7 last season against four-year schools while being outscored 372-33.

The Pirates’ suitcases will be put to good use with games in eight different states.

In their final season of MEAC play, the Pirates were 6-5 overall and 5-3 in the conference under former Coach Connell Maynor.

Hampton dates its gridiron history to 1902 with a 16-0 victory over Armstrong Manual Training.