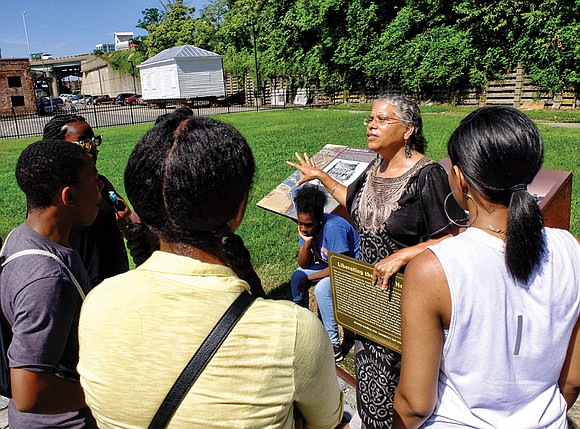 Ana Edwards, chair of the Sacred Ground Historical Reclamation Project, leads a tour in July 2016 of the African Burial Ground and Lumpkin’s Jail site in Shockoe Bottom. Her audience is composed of young people taking part in a summer leadership program sponsored by the Maggie Walker National Historic Site. Photo by Sandra Sellars

A group supporting development of a memorial park in Shockoe Bottom to recall the crucial role this area of Richmond played in the slave trade has won a $75,000 grant from a national trust to support its work.

“We plan to use the money for a two-part study on the economic impact and benefit of developing a park,” said Ana Edwards, chair of the Sacred Ground Historical Reclamation Project, who helped spearhead the park proposal.

One part of the study would examine the tourism benefit of such a park, Ms. Edwards said, while the second part “would seek out nontraditional models of such projects that are sustainable” to offer ideas for Richmond to replicate.

Preservation Virginia, a Richmond-based history preservation group, joined the Sacred Ground Reclamation Project, The Valentine museum and the Center for Design at the University of Massachusetts to secure the grant, she said.

Mayor Levar M. Stoney and members of Richmond City Council have indicated support for creation of a park that would recognize sites in Shockoe Bottom that were central to the slave trade, but have yet to take any steps to advance it.

Meanwhile, the city has millions of dollars squirreled away to pay for developing a museum-style project at the Shockoe Bottom site dubbed the “Devil’s Half-Acre,” where enslaved people were imprisoned and sold.

That development at the site of Lumpkin’s Jail, which became the initial home of Virginia Union University in 1865, also has yet to advance, though the city has paid for consultants to work on the development.

Shockoe Bottom joins 15 other African-American heritage sites that shared in $1.1 million in grants that the National Trust for Historic Preservation issued last week.

Other winners include the Huntington, N.Y., home of jazz musician John Coltrane and the Pittsburgh, Pa., home of playwright August Wilson, as well as the Birmingham, Ala., Baptist church that was the base for the Rev. Fred Shuttlesworth, a key figure in the fight for civil rights.

The funds are coming from the trust’s new African-American Cultural Heritage Fund that was set up to support work to preserve, protect and promote sites related to African-American history.

Brent Leggs, who directs the fund, said African-American historic places traditionally have been undervalued and underfunded.

“Through the action fund, we have the opportunity to raise the visibility and the full contributions of African-Americans to our nation,” he said.

He said the fund received 830 applications, which were narrowed to 16 winners.

Mr. Leggs said the fund was created in the aftermath of the violent and deadly “Unite the Right” rally last summer in Charlottesville, “where “heritage, culture and public spaces collided,” as a way to “tell the whole history of our nation and to foster understanding, healing and reconciliation.”

The rally drew hundreds of white nationalists and neo-Confederates when Charlottesville officials planned to remove a statue of Confederate Gen. Robert E. Lee.

After vicious brawling broke out between white nationalists and counterdemonstrators, a self-professed white supremacist from Ohio drove his car into a crowd of counterdemonstrators, killing one and injuring many. He now faces federal hate crime charges, along with state charges that include murder.