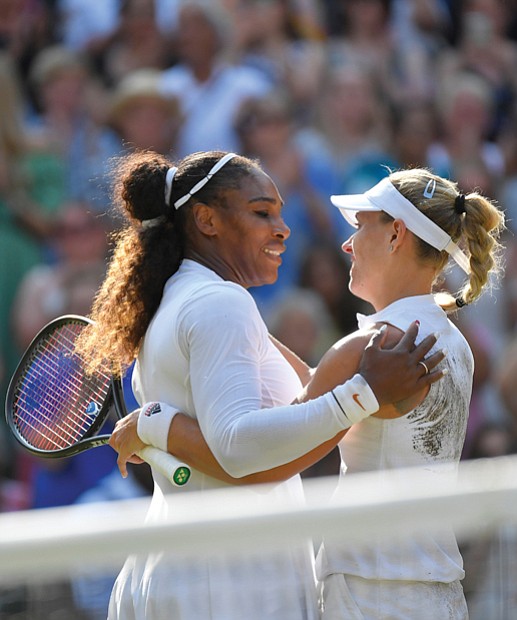 Tennis star Serena Williams said the latest chapter in her sports career is “just beginning” after seeing her hopes of a record-equalling 24th Grand Slam title dashed last Saturday in the Wimbledon final.

It also stopped her joining Court, Evonne Goolagong and Kim Clijsters as the only mothers to win Grand Slam titles in the professional era.

Serena gave birth to daughter Alexis Olympia 10 months ago, and while she looked close to her best at times throughout the past two weeks of competition, she could not find her A-game against fellow former world No. 1 Kerber.

Considering Serena suffered a difficult childbirth and needed several surgeries to remove blood clots after an emergency C-section, it was a huge achievement to contest her 10th Wimbledon final.

Far from being downhearted, though, Serena spoke afterward of her desire to improve in time for the U.S. Open.

“I didn’t know a couple of months ago where I was, where I would be, how I would do, how I would be able to come back. It was such a long way to see light at the end of the road. I think these two weeks have really showed me that I can compete. Obviously I can compete for the long run in a Grand Slam. I can come out and be a contender to win Grand Slams,” she said.

“I took a giant step at Wimbledon. But my journey has just begun. Just have to keep going.”

On Monday, Serena was returned to the world’s Top 30 in the WTA rankings. She climbed 153 places to No. 28 despite her loss in the Wimbledon final.

Kerber moved up six places to No. 4, with French Open winner Simona Halep of Romania retaining No. 1 despite her third round exit at Wimbledon.

Serena arrived at Wimbledon as the 181st-ranked player in the world. She was bumped up to the 25th seed courtesy of her seven titles at the All England Club — the most recent in 2016.

American tennis great Billie Jean King said Serena’s run to the final so soon into her return showed how special she is.

“It was a big day for Serena and it didn’t come true,” said King, a four-time Wimbledon champion. “But let’s face it, this shows what a wonderful athlete she is. Most people would not even be able to be here.

“I think by losing, it will incentivize her even more to do well for the rest of the year, to get really fit and get back. She will want to win it really badly next year.”

Watching the match from the Royal Box were Serena’s good friend, Meghan Markle, who became the Duchess of Sussex in May when she wed Prince Harry, and Ms. Markle’s sister-in-law, Kate Middleton, the wife of Prince William and Duchess of Cambridge.

Serena and her husband, Alexis Ohanian, who also watched the final from the stands, were guests at the royal wedding of Ms. Markle and Prince Harry on May 19 at St. George’s Chapel in Windsor Castle.