James Meredith on mission from God 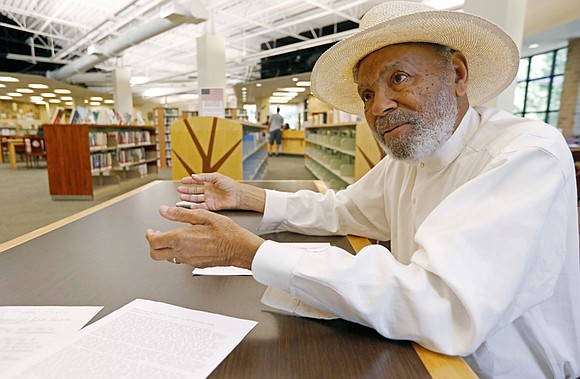 Civil rights figure James Meredith, 85, talks with a news reporter in late June about his plans to visit all 82 Mississippi counties and preach about the Ten Commandments. Rogelio V. Solis Associated Press

He integrated the University of Mississippi while braving mob violence in 1962 — yet he worked in the late 1980s for archconservative Sen. Jesse Helms, considered a foe by many in the Civil Rights Movement.

Wounded by shotgun fire while marching for voting rights in 1966, Mr. Meredith also shuns the title of “civil rights icon,” as if civil rights are different from other rights.

Now at 85, Mr. Meredith could rest assured of a place in history. But he said he’s on a new mission from God — to confront what he sees as society’s “breakdown of moral character” by encouraging people to live by the Ten Commandments.

He said African-Americans must lead the way for Christians of all races to have spiritual healing.

“If the black Christians focus on teaching right, doing right, all other Christian religions would follow suit,” Mr. Meredith said. “Instead of religion healing the black-white race issue, the race issue is going to heal everything and correct all the rest of our problems.”

Mr. Meredith made the remarks during an interview with The Associated Press at a public library in Jackson where he’s a frequent patron.

Wearing cool white slacks, a white shirt and a straw hat, Mr. Meredith was approached by an African-American woman with three young girls. She thanked him for making Mississippi a better place and introduced him to the children.

Mr. Meredith, a slender man with a white beard, asked her to speak up because he doesn’t hear as well as he used to. The children shyly shook his hand. They posed for a picture, and the youngest girl kissed him on the cheek as she left. Mr. Meredith smiled.

“I’ve been in the God business all my life,” Mr. Meredith said. “Ole Miss to me was nothing but a mission from God. The Meredith March Against Fear was my most important mission from God, until this one coming up right now: Raising the moral character up, and making people aware of their duty to follow God’s plan and the teachings of Jesus Christ.”

Mr. Meredith grew up in segregated Mississippi, served in the Air Force and sued to gain admission as the first African-American student at the state’s flagship university. Facing resistance from the governor and riots that led to two deaths, Mr. Meredith enrolled at Ole Miss in 1962 under federal court order and protected by U.S. marshals. He graduated with a political science degree.

In June 1966, Mr. Meredith set out to prove a black man could walk through Mississippi without fear, aiming to trek from Memphis, Tenn., to Mississippi’s capital city. On the second day, a white man shot and wounded him. Other civil rights leaders, including Dr. Martin Luther King Jr., arrived to continue the march.

Since the 1960s, Mr. Meredith has been in and out of the public eye. He has been married and raised children and involved himself in Republican politics. He has run a used car dealership and has spoken on college campuses.