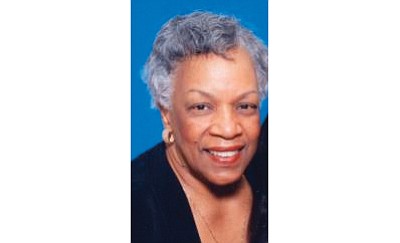 Maxine Lewis Black wore multiple hats as an educator and in leadership roles with women’s organizations.

Mrs. Black was a foreign language teacher and late served as a guidance counselor with Richmond Public Schools in a career that spanned nearly 50 years.

Her contributions in the classroom and the community are being remembered following her death Wednesday, April 25, 2018. She was 77.

Family and friends celebrated her life Tuesday, May 1, at Ebenezer Baptist Church in Jackson Ward, where she had been an active member. She was entombed in the mausoleum at Forest Lawn Cemetery.

The Links held a memorial service on Monday, April 30, at Scott’s Chapel, followed by the AKA’s Ivy Beyond the Wall ceremony.

Mrs. Black later earned a master’s in counseling from Virginia Commonwealth University and then worked with students as a guidance counselor at Bellevue Elementary and John Marshall High School before retiring in 2000.

While a student at VUU, Mrs. Black joined the AKA Sorority, and in 1975, served as president of the Richmond alumnae chapter, Upsilon Omega Chapter. From 1990 to 1994, she served as the 12th director of AKA’s Mid-Atlantic Region, which now includes nearly 120 college and alumnae chapters.

Along with her roles in The Links, a women’s service organization, and the AARP chapter, she also belonged to the Richmond Chapter of Jack & Jill of America Inc. and was named Distinguished Jill of the Year in 1987 for her contributions to that group.

At Ebenezer Baptist Church, Mrs. Black chaired the 150th anniversary committee, twice served as moderator and was a member of the board of administration, the finance ministry, the music council and the pastoral search committee.

Survivors include her daughter, Melba L. Black, and a sister, Marion L. Moye, both of Washington.