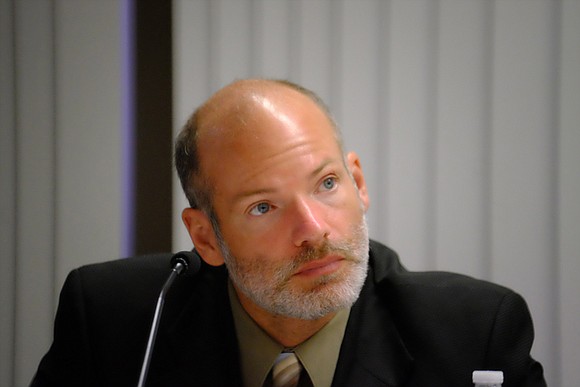 A Richmond School Board member hopes his colleagues will agree to a plan that could shift a few more dollars to address a long list of school maintenance needs.

Jonathan Young, 4th District, said his plan is based on the school system finishing the current budget year on June 30 with $3.5 million in unspent dollars. That is the amount of a surplus projected by Superintendent Jason Kamras’ administration and provided to the School Board on May 1.

Mr. Young is proposing that the board set a policy that 75 percent of any surplus be earmarked to address maintenance needs in the following budget year, with the remaining 25 percent being spent to beef up spending for teachers’ pensions.

He estimates his plan could provide about $2.5 million in additional money for school maintenance in 2018-19.

Richmond City Council would need to approve such a policy as any surplus funds that the RPS finishes with revert to the city.

Mr. Young advanced his plan as the School Board prepares its final budget for the 2018-19 fiscal year that begins July 1.

The board has final numbers to work with now that City Council has wrapped up its work on the budget. The plan that the council intends to approve next Monday, May 14, fails to include major increases in funding for operations and maintenance needs requested by the School Board.

The council followed Mayor Levar M. Stoney’s guidance by re-appropriating $12.5 million the school system did not spend in the 2016-17 fiscal year for RPS to use in the 2018-19 budget and providing $1.6 million in new funds for maintenance.

The council did not add any more funds for school maintenance based on information from Mayor Stoney’s administration that RPS had $13.2 million in unspent maintenance dollars.

Last week, Mr. Kamras contested that idea of a big pot of unspent maintenance dollars. As the Free Press reported, he told the board that the school system has about $822,000 to spend on maintenance through June 30. He also told the board that the $1.6 million in city funds to become available July 1 represented just a small fraction of the $31 million that the school system requested for maintenance in the 2018-19 school year to fix more than 3,200 reported problems.

“Too many of our buildings are in awful condition,” Mr. Young stated in an email to the Free Press outlining his proposal. “My plan for the surplus would be a significant investment in bricks-and-mortar need.”