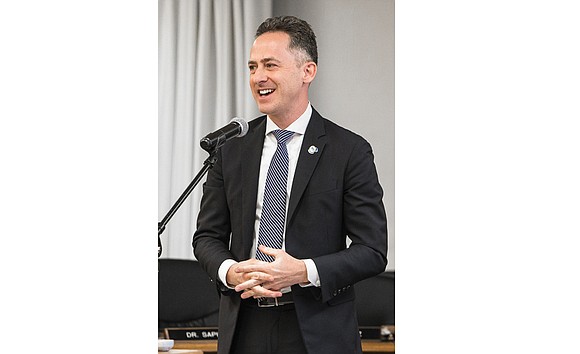 The Richmond School Board and Superintendent Jason Kamras struggled at the board’s meeting on Monday to wrap their arms around continuing daunting budgetary tasks and RPS’ potential future financial shortfall.

Mr. Kamras laid out plans to spend $12.5 million that was unused by Richmond Public Schools during the current school year, turned over to the city and is being returned to RPS in City Council’s 2018-2020 budget approved earlier this month.

Mr. Kamras proposed to the School Board that the funds be use for a 2 percent raise for all contracted employees, including to cover increased health care costs, for a total of $5.1 million.

He also proposed hiring five English as a Second Language teachers, nine bilingual support staff and five bilingual counselors, 12 nurses, including some dedicated to supporting students with disabilities, an internal auditor, for a total of $865,000.

Under his plan, another $6.5 million would go toward three new pilot programs to help students with emotional needs and for programs promoting equity in discipline; new athletic equipment; a 10 percent pay increase for bus drivers and monitors; and payments to the pension fund.

“The condition of the system’s infrastructure needs to be addressed,” Mr. Young said. “We should put our money where our mouth is and use some of those surplus dollars for that purpose.”

He suggested that 75 percent of the money be used for facility maintenance and improvement, while the remainder should help bridge funding gaps in other priorities.

“We need to go to City Council and Mayor (Levar M.) Stoney and advocate for what is truly needed for a fully funded operating budget,” she said.

The School Board and City Council will attend a quarterly meeting of the Richmond Education Compact with Mayor Stoney at 6 p.m. Thursday, May 31, in the auditorium of the Richmond Public Library’s Main Branch, 101 E. Franklin St. The meeting is open to the public.

The board expects to vote on Mr. Kamras’ proposal at its next meeting, Monday, June 4.

Last year, the previous school administration surprised and angered teachers, parents, school advocates and public officials when former Superintendent Dana Bedden announced an $8.3 million surplus in the schools budget. Scores of individuals, organizations and schools advocates had been battling for more money for RPS for years, only to be told no more money was available.

Now, in an effort to assess and manage spending and to improve operations, Mr. Kamras announced at the meeting that he hired The Council of Great Schools, a coalition of 70 of the nation’s largest urban school districts, to conduct an audit of RPS, looking specifically at expenditures, operating practices and organizational structures.