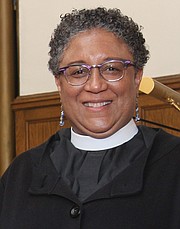 The Rev. Phoebe A. Roaf soon will be leaving the pulpit at historic St. Philip’s Episcopal Church in North Side to become bishop of the Episcopal Diocese of West Tennessee in Memphis.

Her pending elevation from church rector to bishop came Saturday when delegates to the Diocese of Western Tennessee’s annual convention elected the caring priest whom Richmond parishioners call “Mother Phoebe” as their new spiritual leader.

The 54-year-old Rev. Roaf was elected on the first ballot over two other female church leaders who also had been nominated.

After the vote, Rev. Roaf said she wanted the people of the Diocese of West Tennessee to know she is grateful, humble and eager to join in the work they are doing.

“I’m a person who’s very optimistic about the future,” Rev. Roaf said. “I have had a ministry of building bridges and reconciliation in my secular life and in my life as a parish priest, and that is sorely needed at this time in our nation’s history.”

She said that when she assumes the mantle of bishop on May 4, she will be “coming as someone who wants to build bridges and bring people together.”


Presiding Bishop Michael Curry, head of the Episcopal Church in the United States, is expected to lead the installation service.

A former legislative analyst and real estate lawyer, Rev. Roaf already has left her mark on the church. The Pine Bluff, Ark., native was the first African-American woman to be ordained an Episcopal priest in the Diocese of Louisiana where she began her work in ministry, and the first person of color to serve as a priest and associate rector at the largest Episcopal church in Louisiana, Trinity Episcopal in New Orleans.

In 2011, Rev. Roaf made history again when she became the first woman to serve as rector of St. Philip’s, which was founded in 1861 as the Civil War began and was the first Episcopal church in the South that was started to serve African-Americans.

Her path to ministry came later in life after she explored other options. She went from Pine Bluff to Harvard University, where she earned her bachelor’s in U.S. history and then earned a master’s in public affairs from Princeton University.

She spent six years as a researcher and analyst, first for the Virginia General Assembly’s top watchdog agency, the Joint Legislative Audit and Review Commission, and then for Public/Private Ventures in Philadelphia.

Not satisfied, she returned to Arkansas to earn a law degree from the University of Arkansas. She clerked for two years for Judge James L. Dennis of the 5th U.S. Circuit Court of Appeals in New Orleans and then spent five years negotiating leases, mortgages and sales documents for clients of the New Orleans law firm she joined.

In 2005, she started her ministerial journey when she left the law and enrolled in the Virginia Theological Seminary in Alexandria. Three years later, she earned her master’s of divinity and returned to New Orleans to be ordained as a priest and begin her new role at Trinity Episcopal as an associate rector.

Rev. Roaf said that her diverse academic and work experiences have helped her at St. Philip’s and will benefit her as a bishop.

She plans to spend much of her first year as bishop traveling the diocese, which is bordered on one side by the Mississippi River and on the other by the Tennessee River.

“I have a lot of listening and learning to do, hearing people’s stories and sharing my story,” Rev. Roaf said. “I really think the first year for me is going to be a ministry of presence, of learning what is on the hearts and minds of the people of West Tennessee and then together all of us formulating a vision for moving into the future.”

Rev. Roaf said she is part of a trend in the Episcopal Church of more women becoming ordained. Now, almost half of Episcopal seminarians are women, even though the denomination only began to ordain women in the 1970s.

“Just my presence behind the altar has opened up people’s perceptions about who can be called to serve God in an ordained capacity,” Rev. Roaf said. “I think that will be magnified when I assume the duties of shepherd of the diocese.”