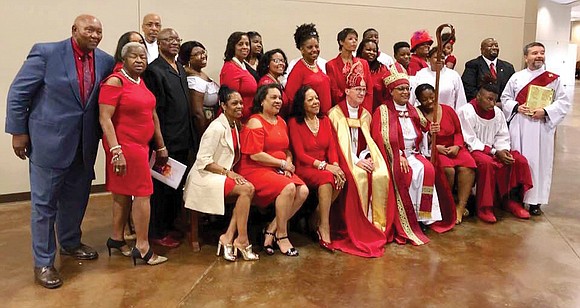 The Rev. Phoebe Roaf, 55, former rector of St. Philip’s Episcopal Church in Richmond, was officially consecrated as bishop of the Episcopal Diocese of West Tennessee on May 4 in Memphis.

She is the fourth African-American female bishop in the history of the Episcopal Church.

About 50 members of her former Richmond parish made the trip to Memphis for the consecration service at Hope Church, which was conducted by Presiding Bishop Michel B. Curry, head of the Episcopal Church in the United States who earned worldwide fame for his sermon at Prince Harry and Meghan Markle’s royal wedding last year.

Bishop Curry is the first African-American to serve as the denomination’s presiding bishop.

“It was outstanding!” Debbie Taliaferro, parish administrator of St. Philip’s, told the Free Press this week.

Ms. Taliaferro said several people from the North Side parish participated in the consecration service as acolytes and lay Eucharistic ministers.

Members of the Richmond parish presented Bishop Roaf with gifts during the ceremony, including a red vestment and earrings.

“As someone who grew up in the Episcopal Diocese of Arkansas in the late 1970s when there were no female priests and no African-American priests in that diocese, I never could have envisioned myself sitting in this seat,” Bishop Roaf told the Huffington Post.

Bishop Roaf went from Pine Bluff, Ark., to Harvard University, where she earned her bachelor’s degree in U.S. history and then earned a master’s in public affairs from Princeton University.

She spent six years as a researcher and analyst, first for the Virginia General Assembly’s top watchdog agency, the Joint Legislative Audit and Review Commission, and then for Public/Private Ventures in Philadelphia.

She returned to Arkansas to earn a law degree from the University of Arkansas. She clerked for two years for Judge James L. Dennis of the 5th U.S. Circuit Court of Appeals in New Orleans and then spent five years negotiating leases, mortgages and sales documents for clients of the New Orleans law firm she joined.

In 2005, she started her ministerial journey when she left the law and enrolled in the Virginia Theological Seminary in Alexandria. Three years later, she earned her master’s of divinity and returned to New Orleans to be ordained as a priest and begin a new role at Trinity Episcopal as an associate rector.

She was the first African-American woman to be ordained an Episcopal priest in the Diocese of Louisiana, and the first person of color to serve as a priest and associate rector at Trinity Episcopal, the largest Episcopal church in Louisiana.

In 2011, Bishop Roaf made history again when she became the first woman to serve as rector of St. Philip’s, which was founded in 1861 as the Civil War began and was the first Episcopal church in the South that was started to serve African-Americans.

In November, delegates to the Diocese of Western Tennessee’s annual convention elected her as their bishop.

“I am honored and humbled to serve the church as bishop and hope that girls and boys who see me in this role will be hopeful about the future of our church,” Bishop Roaf told the media. “As the first black woman to serve as an Episcopal bishop south of the Mason-Dixon line, there are great expectations surrounding my tenure.”

The line of African-American female bishops in the Episcopal Church began with the Rev. Barbara Clementine Harris, who was consecrated in February 1989 as the suffragan bishop of the Diocese of Massachusetts.

The 1.7 million-member Episcopal Church is the American branch of the worldwide Anglican Communion.