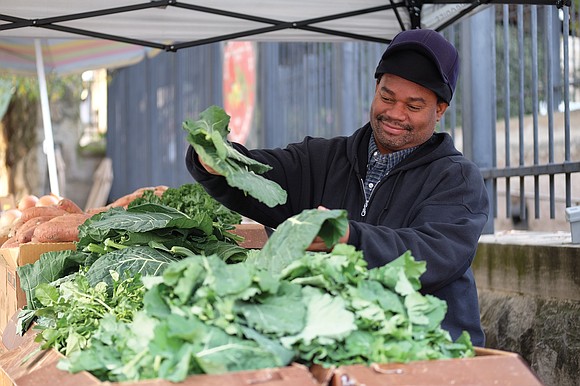 Timothy Christian, a fifth-generation vendor at the 17th Street Farmers’ Market, shows off fresh collard greens. Forced to leave the market during construction, he now sets up his stand outside nearby Main Street Station in Shockoe Bottom. Photo by Sandra Sellars Richmond Free Press

Evelyn “Luceal” Allen and Rosa Fleming will be coming back to the 17th Street Farmers’ Market, while Timothy “Tim” Christian likely will not. For now, he will remain by Main Street Station.

The trio are the Legacy Vendors who have been selling produce for decades at the market. There have been worries about their inclusion in the revamped market ever since the city launched a $3 million facelift 16-months ago that involved razing the aging market sheds and remodeling the area into a European-style plaza and festival space.

As the city prepares to officially reopen the 239-year-old market in a ceremony that Mayor Levar M. Stoney will lead 4:30 p.m. Friday, Nov. 30, George Bolos of the Richmond Department of Economic and Community Development provided information on the future.

He said Ms. Allen and Ms. Fleming, who have sold potatoes, greens and other fresh produce for 60 years, had moved their stands to 17th and Franklin streets, just east of the market, for months. He said there are plans for the sisters to return their stands to the market space “upon completion of the market project.”

Despite the ceremony, Mr. Bolos said that some work remains to be finished and he expects it could be “a few more weeks” before the women set up in the market.

He said the city is dedicating two, 15-minute parking spaces nearby on Franklin Street to allow the sisters’ customers to park and purchase from them.

In returning to the market, Ms. Allen and Ms. Fleming have agreed to meet state regulations governing farmers’ markets and food sales, Mr. Bolos said. To avoid the need for refrigeration, they have agreed to end their sale of eggs and to store any unsold inventory offsite, he said.

Meanwhile, Mr. Christian relocated outside the Main Street Station during the farmers’ market’s remodeling. He hoped to reinstate his site at the south end of the market, but could not after parking was eliminated on Main Street next to the market to accommodate GRTC’s new Pulse buses, Mr. Bolos said.

While some critics believe the Legacy Vendors have not been looked after, Mr. Bolos said that the city has “been responsible to all of the vendors at the market” and has worked with them and their legal representatives.

Mr. Bolos said, however, that some strife resulted from a new insistence that vendors meet state health and agriculture regulations, which was not previously required.

He said the Legacy Vendors have been given special consideration on their hours of operation and on market access, as well as trying “to keep them close to the same basic area to sell.”

“We want to make a place that is inviting for people to continue to come down, sit and visit with (the Legacy Vendors), all the while buying their goods and services,” he said, and also “opening new opportunities for other vendors who produce fields of red, yellow, green and gold produce to sell and supply our community.”