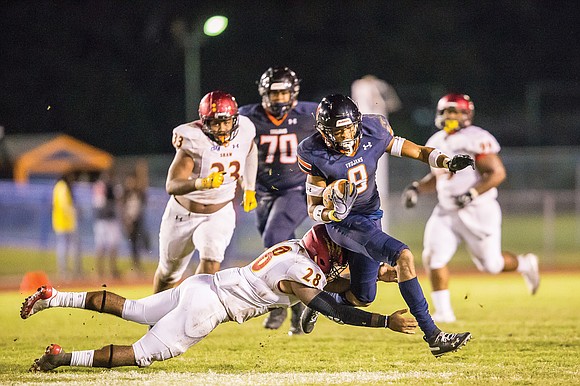 The 2018 Virginia State University football team is starting to look a lot like the 2017 version, which is exciting news around Ettrick.

Coach Reggie Barlow’s Men of Troy have won their last two games by a combined 77-31 and rate a solid favorite this Saturday, Oct. 6, against invading Elizabeth City State University.

Coming off a 10-1 CIAA championship season, the Trojans were slow out of the starting blocks, suffering two road losses and having another game canceled because of Hurricane Florence.

Since then VSU has been kicking up a storm of its own.

After winning 43-14 at Johnson C. Smith University on Sept. 22, the Trojans followed up with a 34-17 rout of Shaw in the long overdue home opener last Saturday at Rogers Stadium.

The Trojans will carry a 2-2 overall record and a 2-0 CIAA mark into Saturday’s game with Elizabeth City State. History suggests a third straight Trojans win.

Harris had nine receptions for 132 yards against Shaw, bringing his season total to 22 catches for 281 yards. Jackson added five grabs for 88 yards.

Demetrius Strickland, also from Hampton, led the rushing game with 63 yards and a touchdown on 15 carries.

Elizabeth City State, whose schedule was hit hardest by Hurricane Florence, has had an unsteady season. The Vikings opened with a 19-10 home win over Central State University of Ohio before losing to the University of North Carolina-Pembroke 51-6.

VSU’s chances of repeating as CIAA champ will be tested Saturday, Oct. 13, when the Trojans travel to Bowie State University. The Bulldogs are 4-1 this season behind quarterback Amir Hall, who twice has been selected as the National Black College Football Player of the Year.