VSU rolls over J.C. Smith; ready for Shaw on Saturday 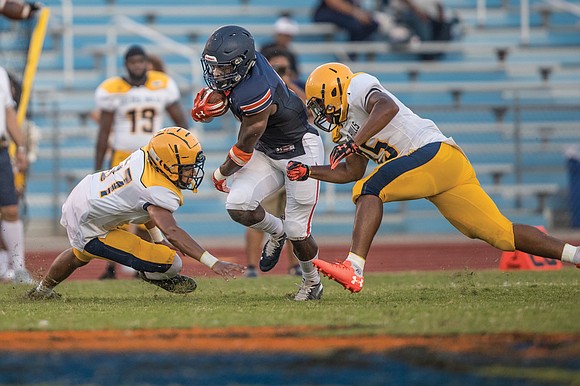 Virginia State University freshman running back Darius Hagans goes in for a 2-yard touchdown during the first quarter of the Trojans’ game against Johnson C. Smith University last Saturday at Rogers Stadium in Ettrick. Photo by James Haskins

The spotlight will be on the quarterbacks this Saturday, Oct. 5, at Virginia State University.

Both Cordelral Cook of the host VSU Trojans and Torrin Campbell of visiting Shaw University are building All-CIAA credentials.

Cook ranks with the NCAA Division II’s most dangerous run-pass option quarterbacks and he showed it last Saturday in VSU’s 31-15 rout of Johnson C. Smith University at Rogers Stadium in Ettrick.

The Georgia native passed for 158 yards and a touchdown and ran for 63 yards and another touchdown as VSU’s record improved to 3-1.

The “Trojan Express” is rumbling. In defeating the University of North Carolina-Pembroke, St. Augustine’s University and Shaw University, in order, VSU has outscored its opponents 100-38.

Meanwhile, Shaw University’s Campbell leads the CIAA in passing with 246 yards per game. The native of Toledo, Ohio, threw for five touchdowns in the Bears’ 49-10 victory over Edward Waters College of Jacksonville, Fla., last Saturday.

Shaw is 2-2 with consecutive wins over CIAA opponent Chowan University and Waters.

Defensively, 225-pound linebacker William Lulu was key with 12 tackles, including two for losses. Lulu is a Florida native who transferred to VSU from North Carolina Central University.

Trojans on a roll