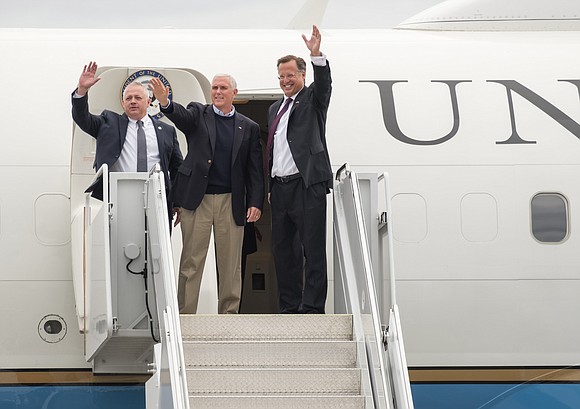 Democrats must hold 194 seats and flip at least 24 seats to gain a 218-vote majority in the U.S. House of Representatives.

In the Senate, Republicans could lose control if they lose just two seats. Democrats are struggling to make it happen while also trying to defend 26 seats now held by the party.

The big question is whether ordinary people who usually pay little attention to midterm elections will turn out to register their approval or displeasure with a president who routinely lies, lashes out at critics and seeks to undermine a free press and other American institutions.

Polls suggest that ordinary voters understand the stakes and are revved up to vote. States with early voting are already seeing surges in early turnout.

In Virginia, Sen. Kaine, a former governor and Richmond mayor, appears to be ahead of Mr. Stewart in the polls.

Most observers are focusing on sharply contested races in the 2nd, 5th, 7th and 10th Congressional districts that will determine if Republicans continue to hold seven of Virginia’s 11 seats in the House.

Four Democratic women, touting their support for Obamacare and their disdain for Republican fear-mongering, are leading the charge, including in the 7th District outside Richmond.

In the 2nd District around Virginia Beach, Elaine Luria, a former Navy commander, is seeking to upset incumbent GOP Rep. Scott Taylor, while in the rural 5th District, Democrat Leslie Cockburn, a veteran journalist, is seeking to win a seat the incumbent vacated against Republican rival Denver Riggleman.

The big hope on both sides is that these races will spark an unusually large turnout.

Certainly, plenty of money is being spent to make it happen.

In the toss-up contests involving three Republican incumbents, Reps. Brat, Comstock and Taylor, independent committees alone have spent $9.2 million on influence ads for and against, a Virginia record for races in non-presidential years, according to the nonprofit Virginia Public Access Project.

Sen. Kaine, who used his campaign to show support for Ms. Spanberger and the other Democratic candidates, is optimistic.

He has said he believes people are coming off the sidelines and are eager take part to decide the contests.

Former President Obama, who has emerged as the top Democrat making the case for the party this fall, hopes that is happening. With President Trump shredding his legacy, the nation’s first African-American president returned to the political fray to implore voters to show up at the polls in November.

“Just a glance at recent headlines should tell you this moment really is different,” Mr. Obama said in a recent speech, “that the impacts of sitting on the sidelines are more dire.”