The free bus service Richmond Public Schools will offer to get more low-income parents to enroll their 4-year-olds in a state- supported preschool program is likely to have to be more extensive and potentially more expensive than originally envisioned.

According to information provided to the Richmond School Board at the June 17 meeting, the contemplated bus service would involve creation of hub sites around the city where the children can be dropped off and picked up.

However, according to a published state guideline for transportation for the Virginia Preschool Initiative, or VPI program, the kind of hubs Richmond now uses for the transportation of K-12 students would not be permitted.

The guideline appears to require door- to-door service for the young children VPI serves, or as close to door-to-door service as possible. Hubs for kindergarten through 12th-grade students can be more distant, and it is not usual for parents to drive or walk their children to them.

The VPI transportation guideline reads: “VPI programs must have a plan for ensuring that VPI eligible students have access to a safe method of transportation to and from the home setting and the VPI site.”

RPS also has to offer transportation service. The guideline notes that trans- portation is mandatory for school divisions offering the VPI program, which is similar to the federal Head Start program in seeking to improve school prospects for at-risk children,

“Transportation must never be a barrier for recruiting eligible children ... and for providing full VPI services to eligible children and their families,” the guideline states, indicating that Richmond has no choice but to restore the service that pre- viously was provided but later dropped to save money.

According to information obtained by the Free Press, the Virginia Department of Education would approve Richmond using a hub service for VPI students, but only if the hub is located within a block or two of each child’s residence. As a result, Richmond might have to offer far more hubs for VPI than it does for older children.

That prospect could challenge the School Board to find additional funding for transportation, which the guideline indicates is mandatory.

When VPI transportation was cut, participation in the program sharply dropped, particularly in the most recent school year when nearly 300 fewer students participated than had been projected.

RPS Superintendent Jason Kamras did not reference the guideline during the June 17 School Board meeting, nor did his two cabinet members involved in its restoration, Chief Academic Officer Tracy Epp and Chief Operating Officer Darin Simmons Jr. 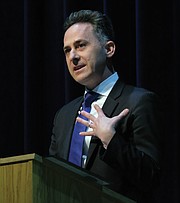 At the meeting, Mr. Kamras indicated that providing transportation for VPI children should be considered as positive.

School Board member Kenya Gibson, 3rd District, has been the most active board member questioning the proposed hub system. She expressed concern during the meeting that there would not be enough pickup and drop off points, which she called a key to raising enrollment.

Mr. Kamras, Dr. Epp and Mr. Simmons did not responded to a Free Press request for comment.