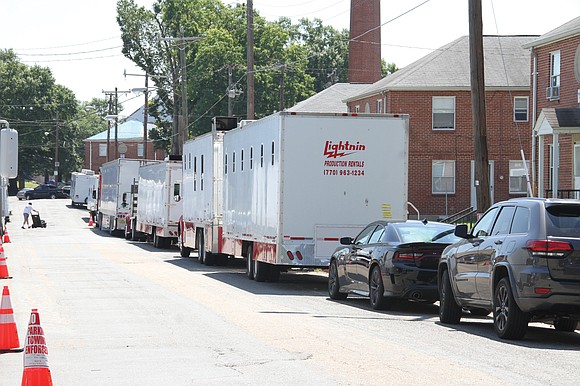 Production trucks line Calhoun Street in Richmond’s Gilpin Court Tuesday where NBA star Kevin Durant, formerly of the Golden State Warriors and who recently signed as a free agent with the Brooklyn Nets, is spending time this week for the filming of the pilot episode of a new streaming series for Apple TV+.

The series, “Swagger,” is based on Mr. Durant’s young years as a top hoops prospect in Washington when he played on the AAU circuit while in middle and high school. The two-time NBA Finals MVP is an executive producer of the project being filmed in the Calhoun Family Investment Center in Gilpin Court.

“Details about the production are hush-hush and media access to the set location is denied,” the production’s publicist Linda M. Colangelo told the Free Press. “This is a closed set.”

Filming is expected to continue at Gilpin Court for more than a week, officials said, before moving to other Virginia locations this summer.

According to the Virginia Film Office, “Filming will be primarily from Caroline to Dinwiddie, and Cumberland to James City … with many big city locations as a key palette.”

The Hollywood Reporter stated that it will air on Apple TV’s streaming service, which starts this fall.