Warriors hope to go the distance after Game 5 squeaker 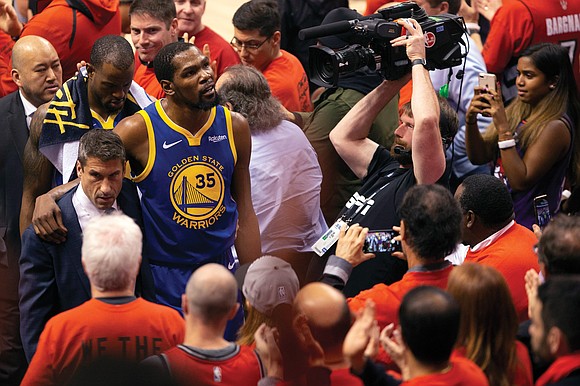 Golden State Warriors forward Kevin Durant, No. 35, glances up at the stands as he is helped off the court Monday night after sustaining an injury to his Achilles tendon during Game 5 of the NBA Finals. Chris Young/The Canadian Press via AP

The Toronto Raptors lead the Golden State Warriors 3-2 in the best of seven series. Games televised on ABC.

Inside their blue and gold jerseys still beats the heart of a champion.

The Golden State Warriors are hobbling and clinging to survival, but they’re still kicking — or more accurately — and swishing 3-pointers in a valiant bid for a third straight NBA title.

On Monday night, Coach Steve Kerr’s squad forced the NBA Finals to a Game 6 with a 106-105 victory over the upstart Toronto Raptors in Canada.

It wasn’t without high drama north of the border.

In gaining the victory, the Warriors’ Kevin Durant — MVP of the past two NBA Finals — suffered an Achilles tendon injury in the second quarter and had to be helped off the floor.

Among the greatest players in NBA history, Durant will miss the remainder of the finals and may face what could be career-altering surgery.

“It’s a bizarre feeling we have right now,” Coach Kerr said in his postgame news conference. “An incredible win and a horrible loss all at the same time.”

Game 6 will be played Thursday, June 13, at Oracle Arena in Oakland, Calif. It will be the final game at the facility that opened in 1966 as Oakland-Alameda Coliseum.

The Warriors are moving to the new Chase Center in San Francisco next season.

And don’t forget Draymond Green, who had 10 points, eight rebounds and the defensive play of the season — a partial block of Toronto player Kyle Lowry’s last-second corner shot that would have given the Raptors the title.

Also in the Warriors’ corner is the revenge factor — revenge against the Raptors’ fans. When Durant tumbled to the floor in obvious pain, the Toronto fans cheered.

“That was classless,” Green said.

After the Raptors’ players and superfan Drake pleaded with the fans for better sportsmanship, the crowd at ScotiaBank Arena began to chant, “KD! KD!”

But the damage was done.

A barrage of 3-pointers was enough to overcome another other-worldly performance by the Raptors’ Kawhi Leonard. The NBA All-Star had 26 points, 12 rebounds and six assists and surely would have been named MVP of the NBA Finals had the Raptors prevailed.

The Warriors remained afloat with their usual recipe — threes, threes and more threes.

The visitors were 20-for-42 behind the arc, with Curry and Thompson accounting for 12 hits. Durant was 3-for-3 from the distance before his injury.

Overall, 42 of the Warriors’ 82 shots were launched from behind the arc.

The Warriors hope to add an exclamation point to their farewell season at the Oracle.

The Californians are eyeing a third straight title and the fourth in five years.

The Oakland arena is the oldest in the NBA and the team doesn’t want to depart as losers.

On April 7, the Warriors closed their regular season at the Oracle by pulling out their throwback “We Believe” uniforms from 2010.

Based on the spirited play in Game 5, nothing — not even a crushing injury to one of the sports’ all-time greats — has shaken that belief.