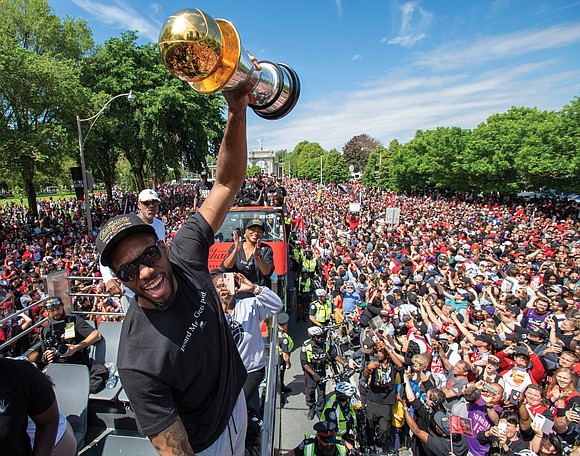 Kawhi Leonard leads the celebration as the Toronto Raptors parade through a sea of adoring fans Monday after upsetting the Golden State Warriors to secure their first NBA title. Frank Gunn The Canadian Press

The NBA playoffs are over, but the excitement continues.

Combining the brilliance of Kawhi Leonard and his teammates with good fortune, the Toronto Raptors are NBA champions, having thwarted the Golden State Warriors’ dynasty.

Canadians hold their collective breath while Leonard, the NBA Finals MVP and arguably the sport’s premier talent, decides if he wants to remain north of the border or take his talents to a more southerly locale.

A decision likely will come this summer as NBA free agency commences.

Here’s the deal. Players can begin negotiating with other teams at 6 p.m. Sunday, June 30. Players cannot actually sign until July 6.

Leonard is at or near the top of the “most coveted” list. And consider: No deal is official until it’s on paper and signed. Verbals don’t count.

Leonard legacy: The 6-foot-7 forward known as “The Klaw” becomes the third NBA player to win the finals MVP title with teams from difference conferences. He joins Kareem Abdul-Jabbar (Milwaukee Bucks and Los Angeles Lakers) and LeBron James (Cleveland Cavaliers and Miami Heat). Leonard was MVP in 2014 with the San Antonio Spurs.

Wounded warrior: In Game 4 of the Finals, the Raptors’ Fred VanVleet was elbowed in the face — an injury resulting in seven stitches under his right eye and a chipped tooth.

Wearing a facial bandage, the undrafted guard out of Wichita State University got even in Game 6, scoring 22 points, hitting five 3-pointers and hounding Steph Curry with a box-and-one defense.

Lady Luck: For sure, the Raptors’ timing was right. For the first time since 2006, the road to the Eastern Conference finals wasn’t blocked by James, now with the Lakers. 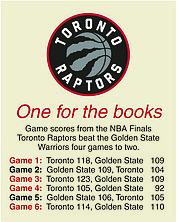 Then there was that mind-boggling shot by Leonard to beat Philadelphia 92-90 in Game 7 of the Eastern Conference semifinals. From the deep corner came Leonard’s desperation jumper as time expired. The shot bounced an oh-my-gosh four times on the rim before dropping.

Injuries are part of sports, but the Golden State Warriors had more than its share of miseries in the finals. Superstar Kevin Durant played only a few minutes in Game 5 before tearing his Achilles tendon.

Klay Thompson went down with a torn ACL in Game 6. Just one more connection from Thompson down the stretch may have forced an iffy Game 7.

Speculation: Leonard is the man in demand as free agency nears.

Options start with staying in Toronto. However, a factor in his decision may include a decision to be made by Raptors’ President Masai Ujiri, who lured Leonard from Texas to Canada. There are reports Ujiri may be leaving Toronto for a similar position with the Washington Wizards.

The Lakers, with James and now All-Star center Anthony Davis, who was acquired in a trade from the New Orleans Pelicans, might become the Best of the West with the addition of Leonard.

Don’t count out the Los Angeles Clippers either. Leonard is a native of Southern California, went to San Diego State University and has a well-known relationship with Clippers Coach Doc Rivers.

The long-suffering New York Knicks figure to make a powerful pitch. Acquisition of Leonard might rescue perhaps the NBA’s most hapless franchise. Also in the Big Apple, the Brooklyn Nets are close to being a contender and figure Leonard would put them over the top.

Meanwhile, Raptors fans from Newfoundland to Manitoba, from Saskatchewan to Nova Scotia, are kicking up their heels in celebration with the Raptors as NBA champions.

But make no mistake, Leonard is the life of the party, and Canada won’t fully exhale until The Klaw accepts an invitation to return.