NBA playoffs down to final four

The NBA playoffs are down to the final four teams, with the games getting underway this week.

The Western Conference finals between the Golden State Warriors and the Portland Trail Blazers continue with Game 2 at 9 p.m. Thursday, May 16, at Golden State. The games are being broadcast on ESPN.

The Eastern Conference finals between the Milwaukee Bucks and the Toronto Raptors continue with Game 2 at 8:30 p.m. Friday, May 17, at Milwaukee. Those games are being broadcast on TNT.

The Trail Blazers’ CJ McCollum had probably the worst night of his basketball life in Richmond six years ago.

In sharp contrast, he enjoyed perhaps his finest moment on Sunday, May 12, pacing the Portland Trail Blazers to a 100-96 win over the Denver Nuggets in Game 7 of NBA Western semifinals.

The 6-foot-3 guard collected 37 points, hitting 17 of 29 shots, and added nine rebounds as the Trail Blazers overcame a 17-point first half deficit.

The long-suffering Trail Blazers’ fans are hopeful McCollum can maintain the hot hand in the Western Conference Finals against the NBA flagship franchise Golden State Warriors.

McCollum, who also had games of 30 points and 41 points against Denver, was a senior at Lehigh University in Pennsylvania and the NCAA’s leading scorer when he traveled to Richmond on Jan. 5, 2013. In the first half of Lehigh’s game against Virginia Commonwealth University at the Siegel Center, McCollum broke his left foot, ending his college career.

No tears necessary. He has bounced back and has joined Damian Lillard as one of the NBA’s best — and highest paid — back courts. Lillard makes $28 million per year; McCollum, $25.8 million. 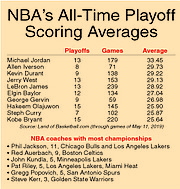 There’s little wonder why Golden State has become the NBA’s dominant team. Two of the Top 9 playoff scoring averages of all time (dating to 1947) belong to current Warriors players.

In the Eastern Conference, with LeBron James no longer in the mix, some observers say Milwaukee’s Giannis Antetokounmpo, the “Greek Freak,” has emerged as the premier talent in the East. Others insist it’s the Toronto Raptor’s Kawhi Leonard.

The jury can deliberate while Antetokounmpo faces Leonard’s Raptors in the East. Fans make a strong case either way.

Leonard has averaged 31 points during the playoffs and hit the game-winning shot as time expired in the Raptors’ Game 7 win May 12 against the Philadelphia 76ers.

Antetokounmpo boasts a 27.4 playoffs average and is a top contender for league MVP. The 6-foot-11 native of Athens dazzles in every aspect of the sport.

What’s missing here? For the first time since 2010, “King James” (either with Cleveland or Miami) isn’t in the Eastern Conference playoff mix.