Leonard and George may boost Clippers to first NBA crown

If the NBA’s Los Angeles Clippers are looking for a catch phrase for next season, “Home Sweet Home” might do.

Leonard, acquired as a free agent from the Toronto Raptors, and George, obtained in a trade with the Oklahoma City Thunder, represent some 55 points per game. They crash the boards with the best, distribute the ball unselfishly and are tenacious defenders.

Also it helps that both can negotiate L.A.’s vastness with nary a road map or GPS.

The talented twosome would seem ample reinforcement for lifting a franchise that already is at the doorstep of contention inside to the living room lounge chair.

Coach Doc Rivers’ squad was 48-34 this past season and nearly clipped the wings of the Golden State Warriors in the playoffs, losing just 4-2.

This marks a gold rush style homecoming for both megastars who are in their physical prime.

Both played in college in California — Leonard at San Diego State and George at Fresno State — before embarking on NBA stardom. 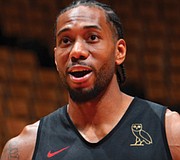 Leonard, 6-foot-7 and known as “The Klaw,” has been an NBA playoffs MVP for both the San Antonio Spurs and, this year, the Toronto Raptors.

The 6-foot-9 George is a six-time All-Star and five-time All-NBA pick. This past season, he was among three finalists for league MVP. 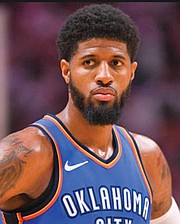 Both players are capable of doing the heavy lifting. George averaged 28 points and 8.2 rebounds this past season. Leonard collected 27 points and 7.3 rebounds per contest.

This is no bargain basement deal. Leonard signed a four-year pact with the L.A. Clippers for $142 million. George’s salary with the Oklahoma City Thunder was for $30.6 million per season.

The “home boys” have a close relationship off the court that was a critical factor in them landing in the same destination. It also helped that Coach Rivers is among the league’s most respected sideline bosses.

Founded in 1970 as an expansion outfit, the Clippers are past due for a title.

The franchise, initially called the Braves, moved from Buffalo to San Diego in 1978, changing the name to the Clippers. The team then moved to Los Angeles in 1984.

The team has never won an NBA title nor been to the finals. It’s best-ever showings were divisional crowns in 2013 and 2014.

As powerful as the Clippers may be, they’ll be tested to prove they’re the top team in their own building.

The Clippers share the Staples Center in downtown Los Angeles with another emerging kingpin, the Los Angeles Lakers.

The Minneapolis/L.A. Lakers combined have won 16 NBA crowns, the last coming in 2010.

The Clippers are among six franchises to never have won the NBA crown. But in 2019-20, California dreaming could be more than just a dream.