As the '6th Man,'-Lou Willuams plays a key role for Clippers 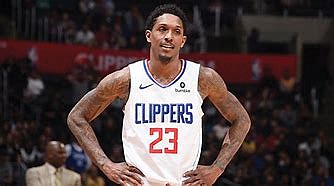 Lou Williams is the star who doesn’t start.

The Los Angeles Clippers guard is the NBA’s all-time leader for most points off the bench.

If the Clippers are to advance to the NBA finals for the first time in franchise history, “Sweet Lou” will play a key role, albeit in the shadows of Los Angeles superstars Kawhi Leonard and Paul George.

Three times, Williams has been selected as NBA Sixth-Man of the Year — 2015 with the Toronto Raptors and 2018 and 2019 with the Clippers.

Williams’ inspiring contributions as a backup even inspired Canadian rapper Drake, a huge Toronto fan, to write a song about him in 2015.

Fittingly, it was titled “6 Man” and was part of Drake’s mixtape “If You’re Reading This, It’s Too Late.”

Surely Williams could have been a full-time starter for other teams. But he has fallen in love with being the “Best Off the Bench.”

“If you want to be a part of a team and a team player, you accept the role,” Williams told The Undefeated.

He began his career in Philadelphia, backing up the great Allen Iverson.

“I probably would have been done, to be honest with you, if I didn’t accept that role,” Williams said. “I had to embrace what was for me and for my career, and go get it.”

Williams broke the “off the bench” record previously held by native Virginian Dell Curry in March 2019. Curry scored 11,153 bench points in 16 NBA seasons. Williams caught him in his 15th season.

There are no signs of a slow down. This season, after 62 games, Williams is averag- ing 18.3 points and 5.7 assists for Clippers Coach Doc Rivers.

Gifted with a picture-book release on his shot, Williams is hitting 36 percent from beyond the arc and 86 percent at the foul line.

Because of COVID-19, all games will be played in “The Bubble,” the ESPN Wide World of Sports Complex at Walt Disney World near Orlando, Fla. The best of seven series will go with the traditional 2-2-1-1-1 format, meaning the high seed starts off with two “home” games. The Toronto Raptors are the defending NBA champions.

Playoff games will be covered by a mixture of ESPN, ABC, TNT and NBA-TV. ABC will cover the NBA Finals.

The Clippers essentially are locked into the second seed behind the Los Angeles Lakers in the Western Division for the NBA playoffs.

The expansion franchise started off as the Buffalo Braves from 1970 to 1974. It moved to San Diego in 1978 and became the Clippers.

In 1984, the team relocated to Los Angeles where it now shares the Staples Center with the Lakers.

The Clippers are joined by Charlotte, Denver, Memphis, Minnesota andNewOrleans as current NBA teams to never make the playoff finals. Williams is among the last players to jump straight from high school to the NBA. In 2005, he opted out of a scholarship from the University of Georgia to enter the draft.

The slender guard became a second round choice — 45th overall — of the Philadelphia 76ers, where he learned from the bench watching Iverson.

Now 15 years later, Williams is still sitting comfortably on the bench—at least for the opening tip. He might feel lost anywhere else.