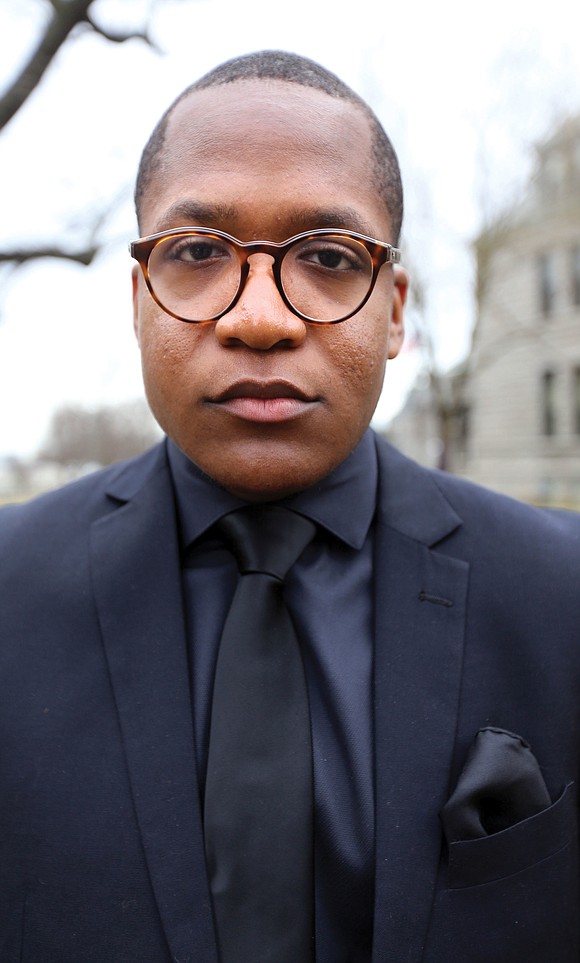 “Richmond has a history of segregation and bigotry. And if we don’t take a stand to start and continue an honest dialogue that would hurt but is necessary, then we will never receive full equality and justice. We will never eradicate institutional racism.”

Jamon K. Phenix, president of Virginia Union University’s Student Government Association, takes this position as a student leader and one of the gatekeepers of his university.

The 21-year-old Atlanta native is a senior studying history and political science. Upon graduation, he wants to attend law school at either Howard University or the University of Richmond to become a civil rights attorney.

In representing the SGA, Mr. Phenix found himself in the media spotlight last week when he wrote a letter to Gov. Ralph S. Northam asking him to delay a visit to the VUU campus planned for a chapel service on “Faith, Identity and Social Justice” that was to honor the Richmond 34, VUU students arrested in Feb. 22, 1960, for protesting at the whites-only lunch counter at the former Thalhimer’s department store in Downtown.

Gov. Northam has come under continued criticism and calls to resign after the public disclosure that his 1984 medical school yearbook page featured a photograph of a person in blackface and another in a Ku Klux Klan hood and robe.

While Gov. Northam first apologized for appearing in the photo he subsequently said neither person in the photo was him. But he acknowledged wearing blackface later in 1984 as a 25-year-old medical resident in San Antonio, Texas, to impersonate Michael Jackson during a dance competition.

The governor has refused to step down from office and planned to use his attendance at the VUU event on Feb. 21 to launch his “reconciliation tour.”

Because of the letter, Gov. Northam announced the evening before the event that he would bow out.

“I respect the wishes of the student body,” Gov. Northam wrote on Twitter. “In lieu of my attendance, I will host the Richmond 34 at the Executive Mansion … to honor their bravery and courage.”

“We invited Gov. Northam to a roundtable event where he could speak, answer our questions and have an honest dialogue about race and reconciliation,” Mr. Phenix says, although no date for such a meeting has been set. “That would give the Gov. Northam an opportunity to have a dialogue and answer questions versus being a part of an audience.”

Civil rights and social justice are important to Mr. Phenix.

“I grew up just down the street from Dr. Martin Luther King’s first home. I was always reminded by my grandparents that you always are to treat people with compassion and love as well as forgiveness,” Mr. Phenix says.

But he said as he grew older, he discovered those concepts were missing from the world. That led him to want to pursue a legal career and to fight for social equity, criminal justice and the right for all people to become productive citizens. He says he chose to attend VUU because it resembled his values and vision and could help shape him as a student leader.

“Student leadership is important because it is a launching pad for careers and professional development,” Mr. Phenix says. “It is an indicator whether a person will be a servant leader to society or a follower.”

As SGA president, he serves on the President’s Council.

“I am able to sit at the table every Tuesday as a member of the council as they create policy and insert my opinions about what is recommended and how it will affect students,” he says.

He says VUU, with its history starting at the Lumpkin’s Jail slave pen in Shockoe Bottom in 1865, “is at the heart of race and reconciliation” in the Commonwealth.

“I will not stop carrying the banner of freedom until every unjustified action is handled,” Mr. Phenix says. “That’s why I believe in social justice and civil rights for all.”

Date and place of birth: May 25 in Atlanta.

Family: The youngest of three sons to Sholon Green and Christopher Phenix of Atlanta.

How did it feel growing up near Dr. Martin Luther King Jr.’s birthplace: Growing up in the heart of Atlanta engrained me with a deep sense of justice and community. Being close to Dr. King’s birth home reminded me that the two principals were synonyms and essential to move a people forward. Whether I was attending a Sunday church service or sitting in a city council meeting, I was being exposed to a level of information that has rooted me inside of civil rights and social justice.

Why you decided to run for Student Government Association president: As I began to notice systemic issues that affected my institution, I started to think of solutions to combat those problems. After two years in student leadership, I decided to throw my name in the hat to help lead with a progressive vision and goal-setting attitude.

What prompted you to write to Gov. Ralph S. Northam: This step was taken as the result of a town hall meeting that was held on campus. In our meeting, we discussed the importance of the event, and some even publicly opposed the governor. However, we created an action plan out of that meeting. The letter was a result of the town hall.

Consensus from VUU’s student body regarding the request: Majority of students stood by the letter and will continue to support honest conversation. We are anticipating the governor’s roundtable and we are preparing accordingly.

What does reconciliation look like to you: Reconciliation must be achieved by first starting with honest and open dialogue, with politics off the table. Let’s admit it, we’re human. However, we have to stand by our mistakes and understand that they will sometimes have unfavorable outcomes. That’s accountability. This must be followed up with action.

What history lesson do you think people received in these past few weeks: The lesson becomes there is more fighting to be done. The Civil Rights Movement has taken on another form and another fight. I believe education is at the heart of that fight.

What role do you see for young people in bringing about change: We have to be at the heart of the change. We are thankful for our ancestors who have fought for the ground we stand on today. However, if we want to continue to see history progress in the right direction, then we must continue to be at the table always prepared to speak up for those who are not able.

What does blackface mean to you and your generation: It represents America’s dark history. It is not surprising to me that our elected officials participated in these heinous acts. For every single public official who is caught in this behavior, there are probably 10 more people doing it willingly and freely.

Do you see demonstrations as a viable option like those of the Richmond 34 more than 50 years ago? Yes, these actions are taken to disrupt injustices, which is key to nonviolent progressive liberation.

Is it much more complex today: No, the grassroots principles of nonviolent protest remain the same, just different people carrying them out.

How I start the day: Praying, stopping at Starbucks to grab a double shot caramel macchiato with almond milk, my planner in hand and then making my way to class.

A perfect day for me is: Enjoying a day around campus, probably having a few meetings, talking with fraternity brothers, speaking with my SGA family and then heading into work. How I unwind: Heading to the library after work, reading African proverbs and talking to my grandma.

A quote that I am inspired by is: “If you can’t fly, then run; if you can’t run, then walk; if you can’t walk, then crawl; but whatever you do, you have to keep moving forward.” Dr. Martin Luther King Jr.

Best thing my parents ever taught me: Treat everyone with respect and compassion.

Person who influenced me the most: My grandparents, William and Mary Green.

The book that influenced me the most: “The Substance of Things Hoped For” by Dr. Samuel DeWitt Proctor.

What I’m reading now: “Soar! Build Your Vision from the Ground Up” by T.D. Jakes and “Campaign Craft: The Strategies, Tactics, and Art of Political Campaign Management” by Michael J. Burton et al.

The one thing that I’ve learned in life is: Never be too hard on yourself and always forgive people with a heart full of compassion and thanks.

My next goal: Getting accepted into law school and becoming a civil rights attorney.