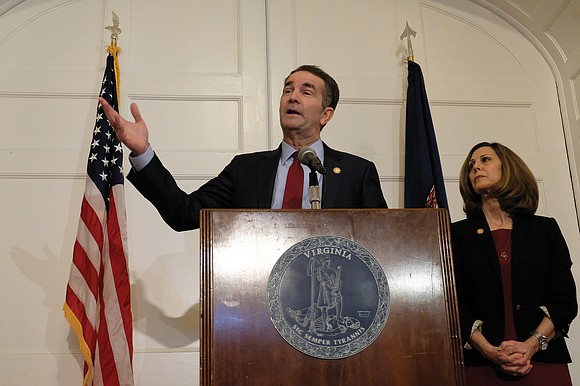 Mrs. Walker’s email message included a claim from her daughter that Mrs. Northam asked that question only of the African-American students in the group. Others on the tour, however, said that did not happen.

“I cannot for the life of me understand why the first lady would single out the African-American pages or why she would ask them such an insensitive question,” wrote Mrs. Walker, who manages the Virginia Department of Education’s Office of Equity and Community Engagement.

Mrs. Walker noted that Gov. and Mrs. Northam had sought forgiveness for racially insensitive past actions, but “the actions of Mrs. Northam … do not lead me to believe that this governor’s office has taken seriously the harm and hurt they have caused African-Americans in Virginia or that they are deserving of our forgiveness.”

Mrs. Walker’s message and her daughter’s letter went viral after the Washington Post published a story about their allegations on Feb. 25.

Mrs. Northam later stated, “I regret I have upset anyone.” But she also defended her decision to highlight the role enslaved people played in building the Governor’s Mansion in 1813 and in cooking there during her tours and other programs.

On Mrs. Northam’s behalf, the governor’s office said that she considers it important to call attention to the enslaved people who worked there rather than just focusing on the past governors and their families who lived in the house.

According to the governor’s office, Mrs. Northam began using cotton bolls and tobacco leaves as props during her tours after meeting with experts at Monticello to get information on presenting a more complete picture of enslaved workers. That has become a significant focus of the tours at the Charlottesville area home of slave-owning President Thomas Jefferson.

Republican Sen. William M. Stanley Jr. was among a bipartisan group of legislators who defended the first lady. He said his daughter, who was a page and participated in the same tour as Alexandra, said the cotton boll was passed around and every page had a chance to hold it, though she noted some of the group chose not to.

“The first lady’s intent was to make sure that everyone felt the pain (enslaved people) felt in some small measure,” Sen. Stanley said.

He also noted that his wife was among a group of lawmakers’ spouses who received a similar tour by Mrs. Northam a week before the pages. He said the spouses also handled samples of cotton and tobacco.

Following the pages’ tours, no one filed a complaint with the Senate clerk or the clerk of the House of Delegates. Reportedly, the only mention was that a page fainted during the kitchen tour and had to be revived.

Delegate Marcia S. Price of Newport News, a member of the Virginia Black Legislative Caucus, and others issued statements praising Alexandra for speaking up.

“Cotton, itself, is a symbol of murder, rape and displacement,” Delegate Price stated.

While the brouhaha has begun to subside, the incident reflects the racial edginess in which the state and its leadership are operating.