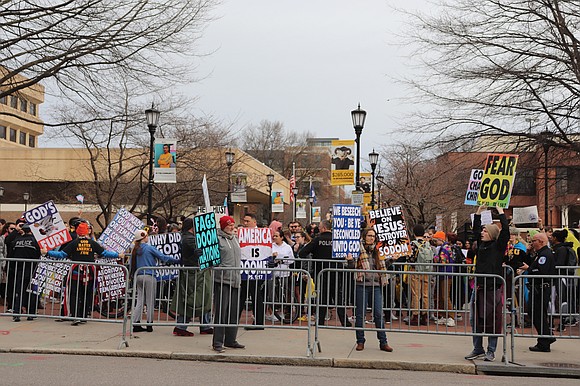 A small group of protesters from Westboro Baptist Church chant and hold signs denigrating the LGBTQ community as a larger group of counterprotesters on the Virginia Commonwealth University campus plays kazoos to drown out their message. Alexandra Zernik

Anti-gay demonstrators from the controversial Westboro Baptist Church in Kansas were met by Randy Blythe of Richmond’s heavy metal band Lamb of God at the Virginia State Capitol on Monday with an unlikely weapon — kazoos.

Armed with colorful plastic instruments, Mr. Blythe and more than 100 other counterprotesters drowned out the six WBC members with a cacophony of chaotic noise.

“I couldn’t bring my band, so we brought kazoos instead,” Mr. Blythe said.

Westboro Baptist Church, which the Southern Poverty Law Center calls “arguably the most obnoxious and rabid hate group in America,” came to the Capitol to protest Delegate Danica Roem of Northern Virginia as the first transgender woman to be elected to the Virginia General Assembly.

In a news release, WBC, which condemns LGBTQ rights, called Delegate Roem a “slave to sin” among other inflammatory statements.

As a rebuke to WBC’s hateful remarks, Delegate Roem encouraged her Twitter followers to donate to her campaign for re-election in the 13th House District, which includes Manassas Park and part of Prince William County. With the hashtag #westborobackfire, more than 900 contributors have raised more than $34,000 since March 1.

“Richmond is fueled by creativity, fueled by musicians and artists, and we’re here to have a party and show them that Richmond is about love for everyone,” Ms. Hammer said.

The music coming from WBC member Shirley Phelps-Roper’s speaker was barely audible over the counterprotesters’ unconventional chorus of kazoos.

Singing along to parodies of pop songs like “Bohemian Rhapsody,” with lyrics modified to match the group’s message, Ms. Phelps-Roper said WBC intentionally chooses well-known music. “We’re trying to talk to this generation, meet them where they live,” she said.

Less than 30 minutes later, the WBC protesters moved west to a sidewalk near the Virginia Commonwealth University Monroe Park Campus, demonstrating against the college’s commitment to diversity and inclusion. Students stopped as they walked to class, some vocally protesting while others stopped and stared.

In a statement to the university community, VCU President Michael Rao said the WBC demonstrators “detest what we hold dear: the beautiful diversity of our community, the inclusive commitments we make to each other, and our values of collaboration and integrity.”

At the counterdemonstration at VCU, Meredith Carrington held a sign that read, “God’s love is greater than your hate, Westboro.” Ms. Carrington said she felt it was her duty to show up to protest WBC’s message.

“I think that Richmond has a long history of hate that we’ve done a tremendous amount to overcome, and I think we need to continue to do that in real ways,” Ms. Carrington said.

VCU student Tiana Roomes said she knew WBC’s message was directed at VCU students. “They are directing this to us because we support gay rights and preferred pronouns for transgender (individuals), and we support our military — and they hate that,” Ms. Roomes said.

The six WBC members were again drowned out by VCU students and counterprotesters who arrived from the Capitol. Within a half hour, the group dispersed peacefully as kazoos buzzed and students chanted, “We’re here, we’re queer, nobody wants you here.”