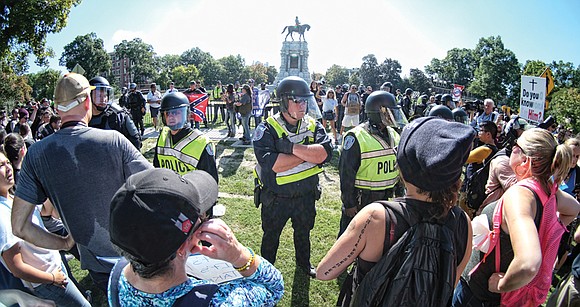 A potentially volatile “Heritage Not Hate” rally led by a neo-Confederate group turned into a war of words Saturday as the small, but armed band found itself outnumbered by hundreds on Richmond’s Monument Avenue.

The Tennessee-based group, CSA II: The New Confederate States of America, called the rally to show their support for the statue of Confederate Robert E. Lee as city leaders wrestle with whether the Confederate monuments on the tree-lined street should be removed or left up “with context.”

“We are here for peaceful purposes so history will not repeat itself,” said Thomas Crompton, who organized the rally with his wife, Judy, and CSA II member Tara Brandau, a Florida resident who identifies with far-right militia groups.

But with a semiautomatic rifle slung over his shoulder and a Confederate battle flag in hand, Mr. Crompton and the six other CSA members found themselves face to face with crowds of loud counterprotesters offering a different view as a line of police dressed in riot gear stood nearby.

“The Confederate flag does not represent all races and causes racial strife. We don’t want that in Richmond. We are here for peace,” said an unidentified counterprotester holding up a sign, “A dying mule kicks the hardest.”

“Traitors go home,” several counterprotesters chanted. “We showed up. Where are they?” others shouted, calling attention to the paltry numbers of neo-Confederates who actually came to the rally.

City officials and police, including forces from Virginia Commonwealth University, State Police and surrounding jurisdictions, braced for Saturday’s rally, held by the neo-Confederate group without a permit and in defiance of Gov. Terry McAuliffe’s ban on demonstrations at the state-owned Lee statue.

It was the first such rally of Confederate supporters since white supremacist groups violently clashed with counterprotesters in Charlottesville last month over that city’s planned removal from public parks statues of Confederates Lee and Stonewall Jackson. One woman was killed and 19 people were injured Aug. 12 when a white supremacist drove his car into the crowd of counterprotesters.

In Richmond, the area around the Lee statue was cordoned off, with barricades of fencing around the statue itself and along the streets radiating from the circle — Monument Avenue from Lombardy Street to Meadow Street and about four blocks of Allen Avenue.

While Monument Avenue was blocked to vehicle traffic, pedestrian access was limited. The hundreds of people who turned out for the 9 a.m. rally and counterprotest had to go through police perimeters to get to the three separate rally points. To get from one side of the monument to another, people were required to walk more than eight blocks around the police barricades simply to cross the street.

Richmonders Lauren Smith and Katy Johnson, dressed in their Sunday best and singing “The Battle Hymn of the Republic,” gave out white paper roses, a symbol of nonviolent resistance in Nazi Germany.

While neo-Confederates waved flags and chanted “All lives matter,” the crowd of counterprotesters continued to grow, their chants of “Racists go home” swelling in volume with the crowd.

State Police dressed in riot gear separated the opposing groups by forming a semicircle around the counterprotesters and forcing them to move back.

At one point, police made the decision to escort the Confederate supporters away from the Lee statue for their safety.

Despite the morning starting with several heated exchanges, the day was mostly peaceful.

One block east of the Lee monument, a conglomerate of groups, including anti-fascists, Democratic Socialists of America wearing “Reds Care” T-shirts, members of Virginia Defenders for Freedom and Justice and Fight for 15, held up hand-crafted signs stating “No shrines to white supremacy.” While many chanted, “Hey, hey, ho, ho, Confederate statues have to go,” others debated each other.

“We are here to fight white supremacy and show solidarity with others doing it now,” said Austin Gonzalez of the Democratic Socialists of America.

“Richmond and Virginia have always been a battleground for this sort of thing. It is important to show out white supremacy in our backyard, because if you don’t, that’s how it expands,” said the Richmond native who now lives in a rural part of Spotsylvania County. “When you oppose it in its cradle, that’s how you stop it.”

Around 10:30 a.m., marchers from a racial justice rally at the Maggie Walker statue in Downtown arrived at Stuart Circle and its statue of Confederate J.E.B. Stuart. Among the marchers were members of Black Lives Matter from New York.

After some debate with an “unofficial” Black Lives Matter member from Newport News and a group of pistol-carrying members of Antifa, the crowd moved through the outer barricades toward the Lee monument.

Clergy members supporting the counterprotesters had their own take on the rally.

“We are looking for some renewal of friendly relations, but it doesn’t look like either side is coming together,” said the Rev. Jabriel S. Ballentine, an Episcopal priest. “And both sides are bearing their heels down in their positions.

“Faith tells us we need true and authentic love, not the cliché, ‘Can We All Get Along,’” Rev. Ballentine continued, “but love that is deep and meaningful where the brothers and sisters on the CSA side would understand and appreciate me to the point where they do not want to hurt me spiritually, emotionally, physically or psychologically.”

Residents of the stately homes along Monument Avenue expressed concern days before the rally about such an event playing out on their doorsteps. At a community meeting on Sept. 14, several asked Richmond Police Chief Alfred Durham if they should head to a hotel or leave town for the weekend.

“I just want people to care about each other and property and Richmond,” she continued. “It’s a good city.”

When it was over, she said she was confused still about what rally organizers expected to achieve.

“I hate to think of the amount of money the city had to spend on police, fencing, trucks, and what was the outcome? Nothing’s different.” 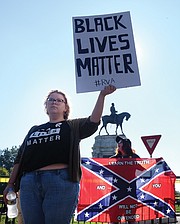 Taylor Medley offers an alternative viewpoint Saturday to neo-Confederate Tara Brandau of Florida, a co-organizer of Saturday’s rally on Monument Avenue to preserve the statue of Lee and other Confederates.

City officials said it will take days before they can determine the cost of the rally to city taxpayers.

The day before the rally, the ACLU of Virginia urged officers to use restraint and proportional response while simultaneously balancing demonstrators’ First Amendment rights.

At the rally’s conclusion Saturday afternoon, the ACLU was among many pleased with law enforcement’s performance. Mayor Levar M. Stoney and Chief Durham also were pleased.

“The Richmond Police Department did a nice job of policing the event, ensuring speakers got to speak, providing separation when necessary and making sure everyone was safe,” said Bill Farrar, communications director for the ACLU of Virginia who was one of several legal observers at the rally.

One concern was State Police using covers over troopers’ name tags during the rally.

“We strongly object to that practice,” Mr. Farrar said Tuesday. “Any member of the public should be able to identify quickly any member of law enforcement who is policing them.”

“We find that to be a little difficult to swallow.”

Mr. Farrar said it is unclear whether such action of police covering their name tags is a violation of law or State Police protocol. But it’s a bad practice, he said.

“It doesn’t do anything to enhance public trust in law enforcement and we strongly discourage it.”

Saraya Wintersmith contributed to this report.

Today’s racial inequities are rooted in the history of the Confederacy, and Richmonders must take ownership of that history, Adria Scharf, director of the Richmond Peace Education Center, told several hundred counterprotesters gathered Saturday at the Maggie L. Walker statue on Broad Street in Downtown.

“We have to name that truthfully, apologize and make amends today,” she told the crowd.

“Today we stand united in the former capital of the Confederacy and there’s no going back.”

The gathering, “Richmond Stands United for Racial Justice,” was organized by the Richmond Peace Education Center to counterbalance the “Heritage Not Hate” rally led by CSA II: The New Confederate States of America in support of keeping the statues of Confederates on Monument Avenue.

Ms. Scharf said the nation is witnessing an awakening of white nationalism, but Richmond must embrace and celebrate the beautiful, rich diversity of the city.

The group chose to hold its rally at the new plaza and statue honoring Mrs. Walker, a Richmond native who, in 1903, became the first African-American woman to charter and operate a bank in the United States.

Despite many obstacles at the time, Mrs. Walker published a newspaper, opened a department store and led a benevolent society. She was an activist who encouraged community uplift and empowerment through education, equal opportunity and voting rights.

On Saturday, some of the rally participants laid signs at the foot of her statue bearing photos of African-American activists Bayard Rustin, Stokley Carmichael, Audre Lorde and Angela Davis with the hashtag “Monuments Should Be.”

The faith community was well represented at the rally, carrying signs that read, “All faiths believe in justice.”

Rev. Jeanne Pupke of the First Unitarian Universalist Church of Richmond reminded the crowd that the faith community is dedicated to reconciliation.

Rev. Pupke encouraged counterprotesters to distinguish themselves in love and peace, and to march with hope and joy.

During the rally, a group approached the crowd, chanting, “No Trump. No KKK. No fascist USA.”

The crowd erupted in cheers and applause when organizers announced the group chanting was from Black Lives Matter New York. They joined the rally, which then marched west on Broad Street to Harrison Street and Grace Street before turning on Lombardy Street to Monument Avenue and Stuart Circle, where the rally continued by the statue of Confederate J.E.B. Stuart.

Along the route, a chorus arose of “We Shall Overcome.” Onlookers shouted their support.

“This is what it’s all about. We need more of this,” one passer-by shouted.

At the Stuart statue, the rally crowd swelled to about 1,000, their message one of strength, unity and love.

“We must stand together. We will no longer stand for these oppressive acts,” said Aisha Huertas, a board member of the Virginia Interfaith Center for Public Policy. “We’re a community of love, radical love. When you cannot love your neighbor, love them anyway. Even in your desperation, anger and fear, love them.”

With Confederate supporters just a block away at the statue of Confederate Robert E. Lee, rally members repeated the lines spoken by an organizer with a megaphone: “It is our duty to fight for our freedom. It is our duty to win. We must love and protect each other. We have nothing to lose but our chains. I am the change today.”

Organizer Jelani Drew of the Richmond Peace Education Center said she felt empowered that so many community members turned out to stand for racial justice.

“This is not where this starts or ends,” Ms. Drew said. “People of color have been doing this since day one. We’re here today and we need to be here tomorrow.”