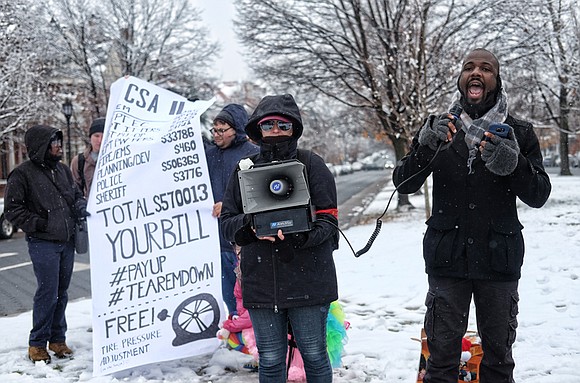 The Richmond Police Department spent a little more than $30,000 in overtime and other costs for the rally last month by neo-Confederates at the statue of Confederate Gen. Robert E. Lee on Monument Avenue.

The Dec. 9 rally was the second organized by the Tennessee-based CSA II: The New Confederate States of America. The four-hour protest was held on a cold and snowy Saturday and drew about 15 neo-Confederates, several of whom carried assault weapons and rifles over their shoulders as they demonstrated their support for keeping the statues on Monument Avenue.

The small group was met by about 30 counterprotesters who called for the neo-Confederates to stop wasting city taxpayer dollars by holding such protests.

The police department shelled out more than $506,000 for equipment, operating and personnel costs during the neo-Confederates’ first rally on Sept. 16.

At that initial rally, a handful of CSA II members were met by several hundred counterprotesters on Monument Avenue. Nine other local agencies, including the city Department of Emergency Communications, the State Police, Capitol Police, Chesterfield County Police, the Richmond Department of Fire and Emergency Services and the Richmond Sheriff’s Office, were a part of the city’s response, pushing the total cost to the city to $570,000.

Mayor Levar M. Stoney’s office did not clarify this week whether the Richmond Police Department was the only law enforcement agency involved in the Dec. 9 rally.

In response to a Freedom of Information Act request, officials said $30,117.22 was spent in overtime and logistical costs “preparing for and patrolling the Robert E. Lee” monument and Monument Avenue. The city incurred no food or quartermaster costs, according to William K. Shipman, associate general counsel for Richmond Police.

Confederate monuments have become more of a national lightning rod since the violent rally in Charlottesville on Aug. 12 by white supremacists, neo-Nazis and Ku Klux Klan members. A 32-year-old woman was killed and dozens of others were injured when a white separatist sympathizer drove his car into a crowd of counterprotesters.

While Mayor Stoney appointed a Monument Avenue Commission in June to gauge public opinion and make recommendations on how best to add “context” to Richmond’s Confederate monuments, several cities throughout the nation opted to remove their statues outright following the Charlottesville bloodshed.

Mayor Stoney repeatedly has expressed a personal belief that the city’s Confederate statues are “shameful” commemorations of white supremacy that should be removed. However, he added removal of the statues as an option for the commission to consider only after the national outcry over the deadly rally.

Richmond City Council recently voted against an ordinance proposed by 9th District Councilman Michael Jones that would have asked the General Assembly to allow the city to remove its Confederate statues.