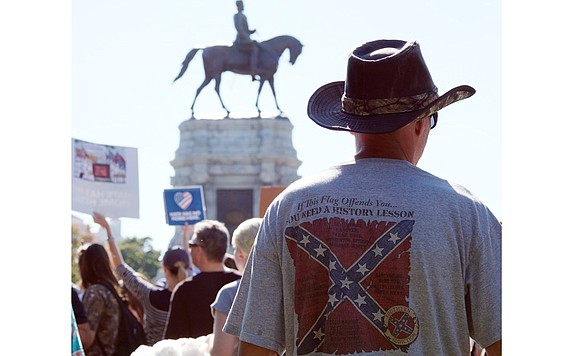 A neo-Confederate group plans to return to Richmond next month for a second “Heritage Not Hate” rally on Monument Avenue, despite new state regulations restricting firearms and the number of people allowed at rallies at the Gen. Robert E. Lee monument.

CSA II: The New Confederate States of America, a Tennessee-based group, “will hold their rally on Richmond City property outside of the traffic circle surrounding the Lee monument in the same location of the Sept. 16 rally,” Thomas Crompton, a rally organizer, told the Free Press on Wednesday.

“We are coming back to Richmond on Saturday, Dec. 9,” he said. “Any and all information will be disseminated the day of the rally.”

Mr. Crompton refused to say how many CSA II members and other neo-Confederate groups plan to show up to support the statues on Monument Avenue that honor Confederates.

Mr. Crompton and his wife, Judy, also organized the Sept. 16 rally at the Lee monument that drew about six CSA members who were greatly outnumbered by roughly 200 counterprotesters, many of whom carried signs calling for the statues to be taken down.

The City of Richmond spent about $570,000 to protect the Lee monument and control the crowd, including $252,328 in overtime pay for Richmond Police officers.

With the Richmond protest coming just weeks after a rally by neo-Confederates and white supremacists turned violent and deadly in Charlottesville, Richmond Police Chief Alfred Durham deployed 475 officers for the Richmond event. Supplementing the city’s police force were an untold number of State Police troopers and officers from the Capitol Police, Virginia Commonwealth University Police, sheriff’s deputies and officers from Henrico, Chesterfield and other jurisdictions.

About $250,000 of the total cost was for equipment, including fencing around the Lee statue and around the Arthur Ashe Jr. Athletic Center on the Boulevard, which was used as a staging area for police.

A major question remains on how city officials will handle the Dec. 9 return of the neo-Confederates and their supporters.

Mr. Lepley added that the department “may have more to say next week.”

Gov. Terry McAuliffe issued an executive order temporarily barring protests at the state-owned Lee monument following the bloody Aug. 12 rally in Charlottesville, in which a counterprotester was struck and killed when a Confederate sympathizer drove his car into a crowd.

The Richmond protest and counterprotest was free of violence. However, in addition to carrying Confederate flags, a few Confederate sympathizers were spotted with weapons. Mr. Crompton carried a semiautomatic rifle slung over his shoulder during the Sept. 16 event.

On Nov. 20, Gov. McAuliffe announced new regulations governing permits for rallies and events at the Lee statue. The state Department of General Services now requires a permit for assemblies of 10 or more people, limits the number of people at the monument to 500, restricts firearms during events and limits the duration of any rally.

Gov. McAuliffe stated that he wanted regulations that balance First Amendment rights while ensuring the safety of Virginians.

The emergency regulations were developed by a Task Force on Public Safety Preparedness and Response to Civil Unrest that was established under the governor’s executive order. They will be in effect for 18 months as the Department of General Services now goes through the regular process, to include public comment and public hearings, on permanent regulations. The public comment period will begin Monday, Dec. 11, and remain open through Jan. 10.

The department also is considering whether changes should be made to Capitol Square regulations in light of the Charlottesville rally and the task force’s work.